The Ladies Who Tell-All 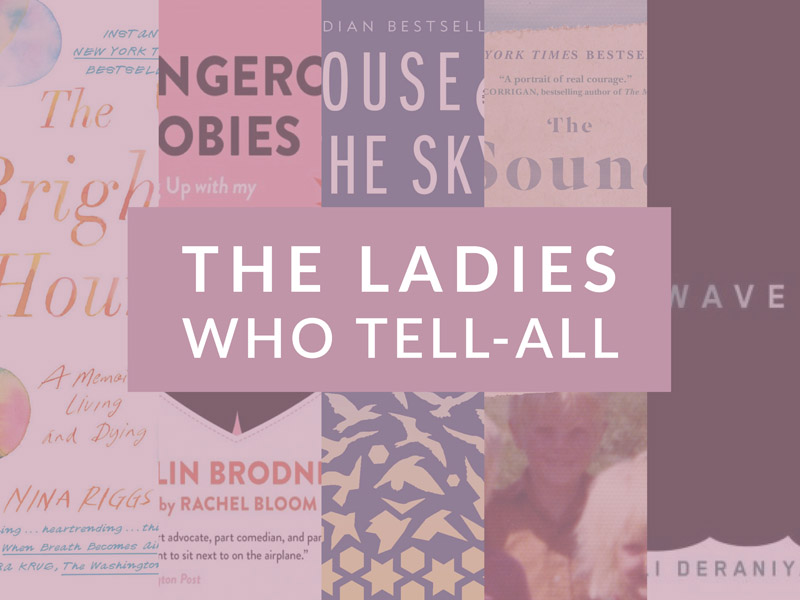 Perhaps the biggest appeal to memoirs is the benefit of their realness – even when the story seems out-of-this-world. Memoirs are honest, raw, and vulnerable. They’re engrossing, heart-wrenching, and enlightening. They allow us to reflect and connect.

This month, we’ve rounded up five incredible female-written memoirs we think will move you, just as they have us.

The Bright Hour: A Memoir of Living and Dying by Nina Riggs  |  BUY NOW

Nina Riggs’ story began with the diagnosis of breast cancer at the age of thirty-seven. Just one small spot. Within the year, she was given the devastating news that her cancer was, in fact, terminal. A wife of sixteen years and mother of two boys under ten, Riggs set out to spend her remaining days writing a memoir about her remaining days. Her book is a beautifully and eloquently written story about not just her life, but also the experience of having cancer and her impending death, along with her family, and the things she loved.

Dangerous Boobies: Breaking Up With My Time-Bomb Breasts by Caitlin Brodnick  |  BUY NOW

NYC comedian Caitlin Brodnick tells of her own experience surrounding cancer, learning both of her predisposition and her family’s predisposition to cancer – due to a genetic mutation which prevents the suppression of tumour growth. With a highly increased chance of developing breast cancer, along with ovarian, colon, and pancreatic cancers, Brodnick opted for a preventative double mastectomy. Her memoir shares her journey in a manner that is funny and facetious, but also honest and raw.

A House In The Sky by Amanda Lindhout  |  BUY NOW

TV reporter by way of adventurous backpacker, Amanda Lindhout shares her sobering account of her time held hostage, during a dangerous trip to Somalia. With the intentions of reporting on the fighting in the country, Lindhout was abducted by a rebel terrorist group on her fourth day and held captive for fifteen months. A House in the Sky details her time in captivity and her tactics for survival – including converting to Islam – told in balanced and detailed prose.

The Sound of Gravel by Ruth Wariner  |  BUY NOW

As the thirty-ninth of her father’s forty-two children, Ruth Wariner grew up in an unconventional, polygamist family farm in rural Mexico, where authorities ignored the practices of the community. Her memoir tells of a childhood filled with adversity and violence, including the brutal murder of her father by his own brother. After her mother’s remarrying, Wariner and her siblings are trekked between Mexico and the United States to collect welfare, and she recognizes the potential for a different, better life in the U.S., one which she must struggle to forge toward.

On December 26th, 2004, Sonali Deraniyagala lost her parents, husband, and two young sons, while vacationing on the southern coast of Sri Lanka, to one of the deadliest natural disasters in history: the 2004 Indian Ocean earthquake and tsunami. Deraniyagala miraculously survived and recounts the horrifying moments following the disaster and the long journey that came afterward. Engrossing and unsentimental, her memoir details her struggles with the tragedy, her loss, and her despairing grief in life after the wave.