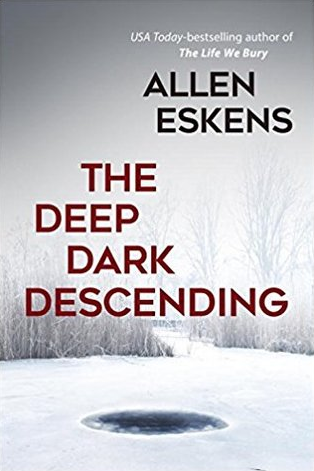 Having enjoyed The Life We Bury, I jumped at the opportunity to read an advanced copy of The Deep Dark Descending.

Since the story was told in two different time periods that came together close to the end, it was hard to put the book down. The story starts with the protagonist, Max Rupert, mentally struggling to kill the man who murdered his wife. The story reverts to how he found out that his wife’s hit and run accident was no accident, but a planned murder for hire by people that Max is familiar with in his line of work. Max is not only a grieving widower, but a detective who finds out who is behind his wife’s death and brings everyone to justice… In his own way.

Max has some help from his partner, Niki Vang, while looking into another unrelated murder on New Year’s Day piecing together the pieces of the puzzle as to who would want his wife murdered and why. Max learns that his wife, a hospital social worker, was trying to protect a young girl from possible sex trafficking and got caught up in a sinister plot that others will do anything to keep secret, ultimately costing her her life.

Despite the two different time periods in which the story takes place, which are only a matter of days apart, the story is easy to follow and is cohesive. Mr. Eskens also captures the horrifying frigid temperatures in which Max physically struggles with to bring his plan of revenge to fruition, but he also develops the struggle with his conscience to do the right thing or the thing that feels right to him.

The only reason I gave the book 4.5 out of 5 stars is because I wanted more from the ending. I hope there is a sequel in the works for this book because I need to know how Max Rupert’s life turns out.