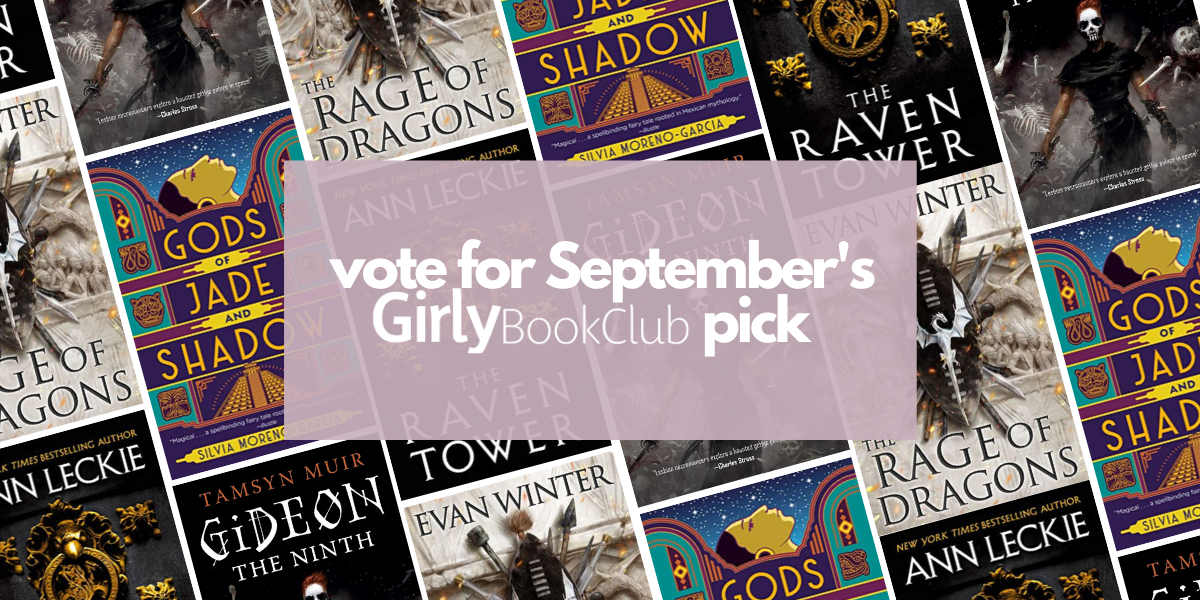 Every month we're pleased to bring you a short list of contenders for our Monthly Girly Book Club pick. We work really hard to ensure the list includes only titles available in paperback in our main markets, making the book more accessible to our membership. We also try to include a variety of authors and genres. We spend hours and hours pouring over potential books, their release dates, costs and availability. We hope you enjoy our selection.

Gods of Jade and Shadow

The Mayan god of death sends a young woman on a harrowing, life-changing journey in this one-of-a-kind fairy tale inspired by Mexican folklore. The Jazz Age is in full swing, but Casiopea Tun is too busy cleaning the floors of her wealthy grandfather’s house to listen to any fast tunes. Nevertheless, she dreams of a life far from her dusty small town in southern Mexico. A life she can call her own.

Yet this new life seems as distant as the stars, until the day she finds a curious wooden box in her grandfather’s room. She opens it—and accidentally frees the spirit of the Mayan god of death, who requests her help in recovering his throne from his treacherous brother. Failure will mean Casiopea’s demise, but success could make her dreams come true.

In the company of the strangely alluring god and armed with her wits, Casiopea begins an adventure that will take her on a cross-country odyssey from the jungles of Yucatán to the bright lights of Mexico City—and deep into the darkness of the Mayan underworld.

Gideon The Ninth by Tamsyn Muir

The Ninth Necromancer needs a swordswoman.

Gideon has a sword, some dirty magazines, and no more time for undead bullshit.

Brought up by unfriendly, ossifying nuns, ancient retainers, and countless skeletons, Gideon is ready to abandon a life of servitude and an afterlife as a reanimated corpse. She packs up her sword, her shoes, and her dirty magazines, and prepares to launch her daring escape. But her childhood nemesis won’t set her free without a service.

Harrowhark Nonagesimus, Reverend Daughter of the Ninth House and bone witch extraordinaire, has been summoned into action. The Emperor has invited the heirs to each of his loyal Houses to a deadly trial of wits and skill. If Harrowhark succeeds she will become an immortal, all-powerful servant of the Resurrection, but no necromancer can ascend without their cavalier. Without Gideon’s sword, Harrow will fail, and the Ninth House will die.

Of course, some things are better left dead.

The Rage of Dragons by Evan Winter

Beth Murphy is on the run...

Game of Thrones meets Gladiator in this debut epic fantasy about a world caught in an eternal war, and the young man who will become his people’s only hope for survival.

The Omehi people have been fighting an unwinnable fight for almost two hundred years. Their society has been built around war and only war. The lucky ones are born gifted. One in every two thousand women has the power to call down dragons. One in every hundred men is able to magically transform himself into a bigger, stronger, faster killing machine.

Everyone else is fodder, destined to fight and die in the endless war. Young, gift-less Tau knows all this, but he has a plan of escape. He’s going to get himself injured, get out early, and settle down to marriage, children, and land. Only, he doesn’t get the chance. Those closest to him are brutally murdered, and his grief swiftly turns to anger. Fixated on revenge, Tau dedicates himself to an unthinkable path. He’ll become the greatest swordsman to ever live, a man willing to die a hundred thousand times for the chance to kill the three who betrayed him.

Gods meddle in the fates of men, men play with the fates of gods, and a pretender must be cast down from the throne in this breathtaking first fantasy novel from Ann Leckie, New York Times bestselling author and winner of the Hugo, Nebula, and Arthur C. Clarke Awards.

For centuries, the kingdom of Iraden has been protected by the god known as the Raven. He watches over his territory from atop a tower in the powerful port of Vastai. His will is enacted through the Raven’s Lease, a human ruler chosen by the god himself. His magic is sustained via the blood sacrifice that every Lease must offer. And under the Raven’s watch, the city flourishes. But the power of the Raven is weakening. A usurper has claimed the throne. The kingdom borders are tested by invaders who long for the prosperity that Vastai boasts. And they have made their own alliances with other gods. It is into this unrest that the warrior Eolo--aide to Mawat, the true Lease--arrives. And in seeking to help Mawat reclaim his city, Eolo discovers that the Raven’s Tower holds a secret. Its foundations conceal a dark history that has been waiting to reveal itself...and to set in motion a chain of events that could destroy Iraden forever.