Salt to the Sea by Ruta Sepetys (review by Jennifer Boksman) 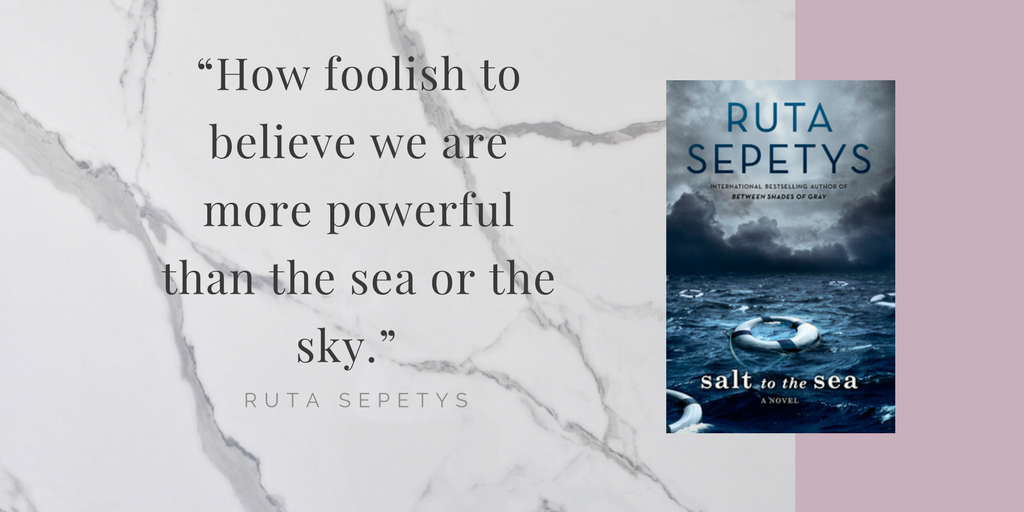 It is winter 1945, the war will be ending soon, but no one knows that at this time. Four teenagers have been struggling to survive the horror for years.  Each carries their own horrible secret. Joana struggles with her guilt, yet helps many people along the way with her medical knowledge, well educated Florian is running for his life after a theft, Emilia who cannot speak the language and is trying desperately to have everyone not discover her true identity is humiliated and must carry a burden and Alfred, what can I say about Alfred? From the moment we are introduced to him he is very easy to dislike. His tale is so unlike the others. He is self-absorbed, selfish, and thinks his efforts will be rewarded by the Fuhrer. He lives in a dream world.

This story tells the tale of these “kids” from 4 different countries who come together over the course of the book. They are with others who are also desperate to escape and run for miles upon miles to get to the coast where evacuation has been ordered. Hoping to survive the journey and the advance of the Soviets who are closing in,  these teenagers and thousands like them are struggling to survive and get to the Wilhelm Gustloff, a ship that promises safety and freedom. After “googling”, I discovered that the ship did exist and did try to evacuate thousands of refugees. It was the greatest loss of life in maritime history, a luxury cruise ship that held 2000 people originally (approximately) but needed to hold 10,000 (approximately) refugees.

This story is written from each of the teenager’s perspectives and each has a tale to tell. A story of hatred, death, hunger, and atrocities we can not even imagine. It is beautifully written and I thoroughly enjoyed the way Ruta told this story. Not having been alive at the time of WWII, but having grandparents who survived the war, I thought this story treated this topic with dignity, kindness, and illumination. Enjoy!