Other Terrors, Edited by Vince A. Liaguno and Rena Mason (Review by Julie Ramhold) 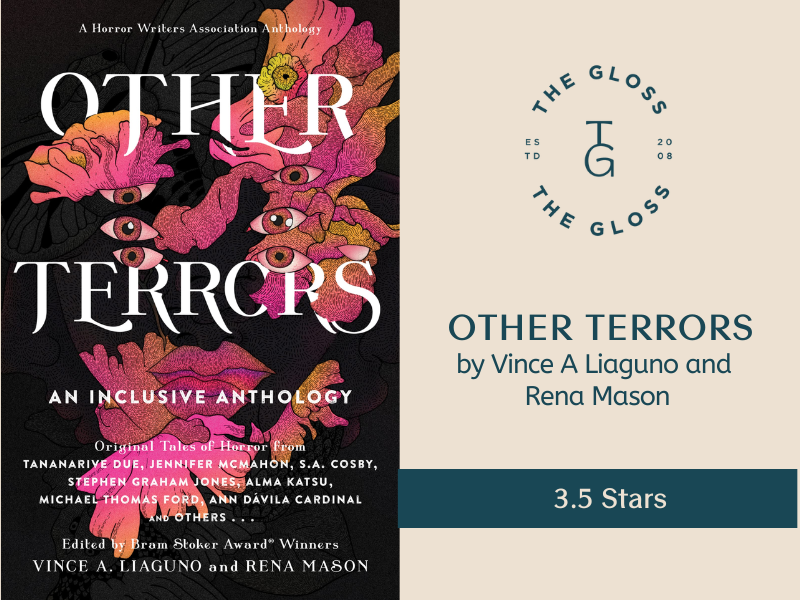 Rating: 3.5*
“We were not witches before we came here, but how we sizzle when we step into the holy dim now, our skin under our slips burns.”
-from The Asylum by Holly Lyn Walrath

As this is an anthology, it’s a mixed bag of success in my opinion. It’s branded as an “inclusive” anthology and it seems some authors were a little broad with that term. I had hoped and expected several stories of queer fiction, but that isn’t the case. That said, they’re not all bad or disappointing either. I ended up rating each piece individually and averaging them to get my overall rating.

Other Fears, by Christina Sng. This is the first work in the book and it’s a poem. It’s a decent poem, 3* out of 5*, but can definitely be overshadowed by other stories within this compilation.

Idiot Girls by Jennifer McMahon is the first short story and this gave me high hopes for the anthology as a whole. I gave it a 4* rating simply because it was a teeny bit predictable but a very good story overall and I really liked it. I honestly would read an entire book based on this story.

Waste Not by Alma Katsu. I really wanted to love this one, but it ended up being 3* for me. I wasn’t really clear on the “other” for this one, except that the main character never felt like part of her late husband’s family. She’s also a detective. The story itself is about the main character trying to clean out her mother-in-law’s home and coming across some interesting information regarding a murder years back. The story certainly isn’t bad, but it felt disjointed from what I expected the anthology to be and even now I’m still trying to figure out how it fit the assignment, so to speak.

Night Shopper by Michael H. Hanson. I gave this one 4* as it was a very cool look at some eclectic night customers – Mr. Tepes makes an appearance, for example. The main character is a trans woman and also wears a hijab, and drives a car that she herself says others might think it looks like it’s right out of Mad Max. Skathi is a really likeable character and her night customers come to her rescue right when she needs it most. This is a good mix of real and unreal “other” and a great example to show that humans are often the real monsters in the world.

Scrape by Denise Dumars. I’m not usually a fan of body horror, and I think this one definitely falls into that category, but it’s not too gory or anything. I think even if you’re squeamish you can enjoy this one, which I gave 4*. It does touch on partner death, so it’s one of the sadder reads, but it also is really intriguing and I honestly wanted more when it was done. It ends just fine, don’t get me wrong – I just think the story could potentially be turned into a full-blown horror novel successfully.

Mud Flappers by Usman T. Malik. This one was definitely interesting and is dedicated to the fishermen and native residents of the Karachi coast, which gives it an extra dimension in my opinion. It’s more fantasy horror, I think, and another that I would like to see more from as far as world-building and lore goes. I gave it 4*.

Churn the Unturning Tide by Annie Neugebauer. I wanted this one to freak me out, but in the end it was unnerving, if that. I honestly kind of found it forgettable, but it was an okay read. I gave it 3*.

There’s Always Something in the Woods by Gabino Iglesias. This one was pretty creepy, a solid 4* for sure. The characters were relatable, and Iglesias does a great job of making the reader feel trapped along with them and will make you think about what you’d do in the same situation.

The Turning by Hailey Piper. This was another 4* read for me. It was just so different in a good way, and our main character becoming an other from her parents still finds her people by the end. I really enjoyed this one even though it kind of threw me at first with what the turning is referring to.

Help, I’m a Cop by Nathan Carson. This one feels disjointed and just tragic, really, a 3* read for me. Said cop seems to have become a cop because his dad tried to make him “macho” and didn’t accept that he was gay. Going down that road leads to the cop making poor decisions in his job and some young ravers taking revenge on him at the start of the story. Present day is interlaced with flashbacks to get some kind of background.

Miss Infection USA by Shanna Heath. This was honestly so different and original. It’s not really spooky, but it is memorable. Definitely a 4* read from the book and one that I’ll probably go back and read again.

All Not Ready by Tracy Cross. I rated this one 3* simply because there’s a lot the reader doesn’t know. It seems to be set in a dystopian future, and the main character is trying to develop a project for a science fair type of event? There seems like some good promise there, but I was left wondering more about what was going on and honestly what had just happened so it was only an average read for me.

Illusions of the De-Evolved by Linda D. Addison. This is another poem, and it was fine. I think I may just be bad at reading poetry, but it felt like a 3* read to me.

Black Screams, Yellow Stars. This was an incredibly effective horror read, 5* for sure. It’s only a couple of pages, and it just filled me with dread and unease. There are references to the Holocaust and racial hate crimes and sadly for part of the story it seems like it could be one of those things that occurred 50 years ago or 5 years ago. And by the end, when you see the tipoff to when it’s happening, it just makes it that much more horrific.

Kalkriese by Larissa Glasser. This one certainly started out promising, with a glimpse of what’s to come, but it was so long I quickly grew bored waiting for the big reveal. I finished it, but it was 26 pages and I felt like it could’ve gotten the message across just as effectively if it had been shorter. This was just a 3* read for me.

The Devil Don’t Come With Horns by Eugen Bacon. Trigger warnings, first and foremost: animal death, parental death, racial slurs. This wasn’t that great, in my opinion. It certainly had potential, but some stuff felt like it was more for shock value, and honestly even now I can’t remember what the so-called horror was meant to be other than just hateful humans yet again. I gave this one only 2*.

Invasive Species by Ann Davila Cardinal. Okay, the main character of this one irritated me so much until somewhere near the end it clicked that that’s exactly how we’re supposed to feel. That said, it ended up with surprising twist, too, and I ended up actually liking it more than I thought I would. I gave it 4*.

The Asylum by Holly Lyn Walrath. This is the same story I pulled the quote from up top and it’s one of my favorites. It has a great gothic atmosphere and highlights actual atrocities women in asylums faced in the late 1800s, specifically the Women’s Lunatic Asylum on Blackwell’s Island, I believe, since Nellie Bly is alluded to. There’s some really lovely language in this story despite what it’s describing and I was torn on the rating, but I think it deserves 5*.

Tiddlywinks by Stephen Graham Jones. Trigger warning for racist language. This one started off kind of interesting and then just quickly descended into something that made sense, but was also so ridiculous I can’t imagine it being consider spooky to anyone. If this is what Jones’ novels are like, I’m not sure I’ll be reading them. It’s 2* at best.

Where the Lovelight Gleams by Michael Thomas Ford. This was another one of my favorites, a solid 5* read, but it ends up being one of the sadder and almost despairing stories in the book. Highly recommend, and would honestly read a full-fledged novel about this world and its characters, but definitely a feeling of defeat in the end.

It Comes in Waves by Jonathan Lees. I don’t really know where to start with this one, so I’ll just say it got a 1* rating from me. It reads like a bad fever dream or one of those weird dreams that you have that makes total sense within it but when you wake up you’re just like “what was that”. I couldn’t tell you what actually happened in this story because I’m honestly not sure if any of it was real.

The Voices of Nightingales by M.E. Bronstein. This one was really interesting, 4* for sure if not higher. This is another one that I feel like would make a really great full-length book with a unique world and premise. I was left wanting to know more, but in a good way.

What Blood Hath Wrought by S.A.Cosby. Okay this one was probably the scariest one in the whole anthology and definitely 5* worthy. I will go back and read this one again, because it was the only one that even kind of began to give me goosebumps while reading. True horror through and through, and with an interesting premise as well.

Incident at Bear Creek Lodge by Tananarive Due. I wanted to love this one – I’ve heard such great things about Tananarive Due and I have some of her books on my TBR so I was excited to finally get an introduction to her writing in this anthology. And it’s excellent, solid writing. The problem I had with this story – and why it only got 3* from me – is because it feels like it’s building and building and then it just…stops. It’s not a short story, either – it’s 26 pages and we learn about some characters during that time that really makes me want to know more. But we have a big reveal at the end and literally just a couple of lines later it stops. We don’t have any real explanation for why the grandmother that the main character Johnny has gone to see is as hateful as she is, or why she’s so abusive. Some things that feel like they’re going to come back, like her long nails that draw blood so easily, just never do. And a creature that Johnny is investigating gets a reveal but then the story just stops like two lines later. The ending is so abrupt it feels unfinished to me and I wanted more. 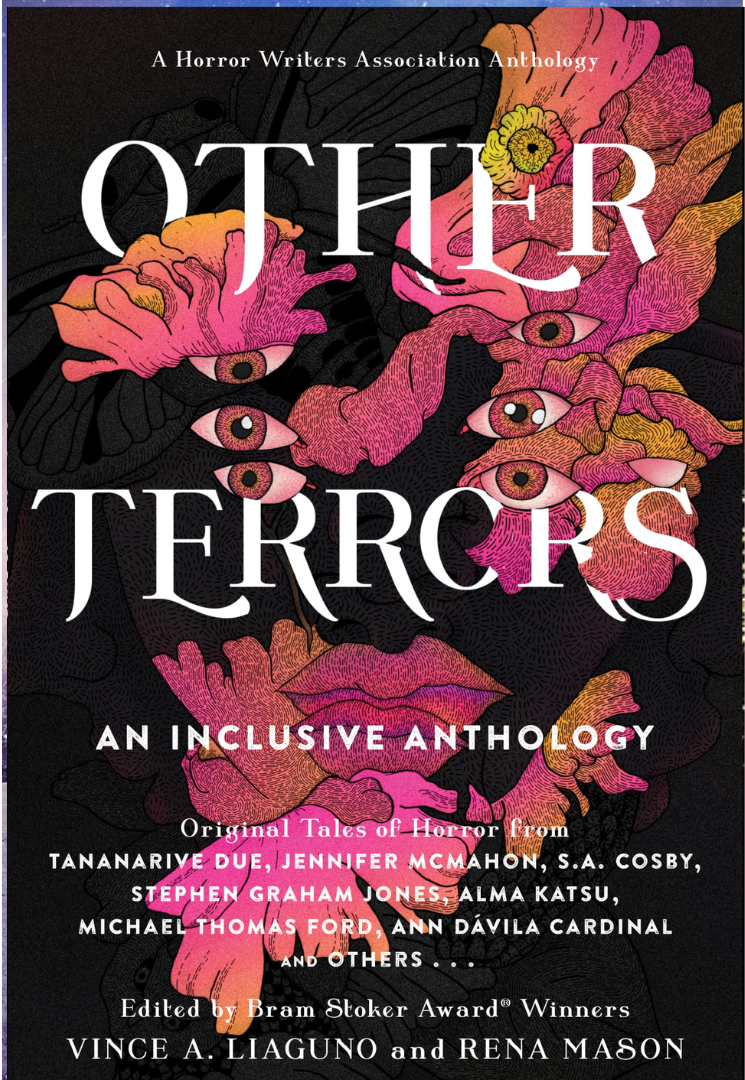