Mornings on Main by Jodi Thomas (Review by Jessica Bedard ) 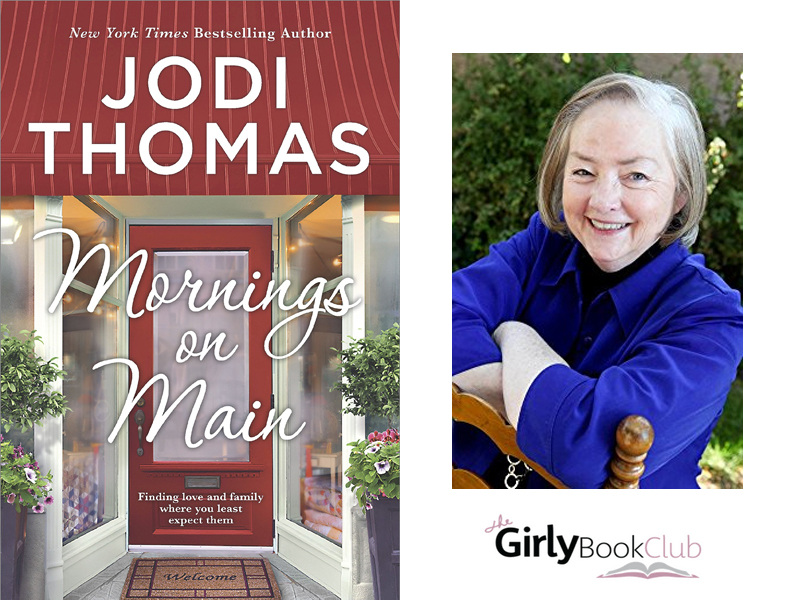 In Mornings on Main, Jodi Thomas acquaints readers with Jillian James, a self-proclaimed drifter who temporarily lands in small-town Texas in search of ties to her long-absent father, who left her with a strong aversion to attachment to both people and places.  Connor Larady, by contrast, is the antithesis of Jillian, and lives a life perpetually weighed down by so many commitments to others that he has become tethered to the town of Laurel Springs, with his own dreams crushed under the weight of upholding his responsibilities. The widowed single-father hires Jillian to prepare his mother, Eugenia’s, quilting shop for closure.  Eugenia and her shop are the heart and soul of Laurel Springs, and Eugenia holds the stories and memories for many in the town despite slowly losing her own memories and independence due to the onset of Alzheimer’s.  As Jillian reluctantly grows closer to Connor and Eugenia, her resolve to remain detached begins to falter, and she explores the possibility of allowing herself to open up and let others in.

Admittedly, I wasn’t sure what to expect when I saw that it was a Harlequin romance novel, but it was more of a slow romantic stroll than a bodice-ripping page turner.  Albeit somewhat predictable and cliché at times, the characters were both likeable and relatable, and the juxtaposition of Jillian’s determined detachment with Connor’s bleeding heart worked well for the story.  Through the characters of Jillian, Eugenia, and Connor’s teenage daughter, Sunnie, Jodi Thomas was able to explore three different generations of women and their connection and relationship to memories, with Eugenia building her life around preserving memories of everyone else while subsequently beginning to lose some of her own, Jillian activelytrying to live without creating any memories, and Sunnie trying to navigate adolescence and the beginnings of romantic relationships on her own terms.  The story is a light and easy read, and provides a couple of hours of escape into heart-warming relationships set in an idyllic sleepy Texas town.