Meet Me In Monaco – Behind the Story Essay 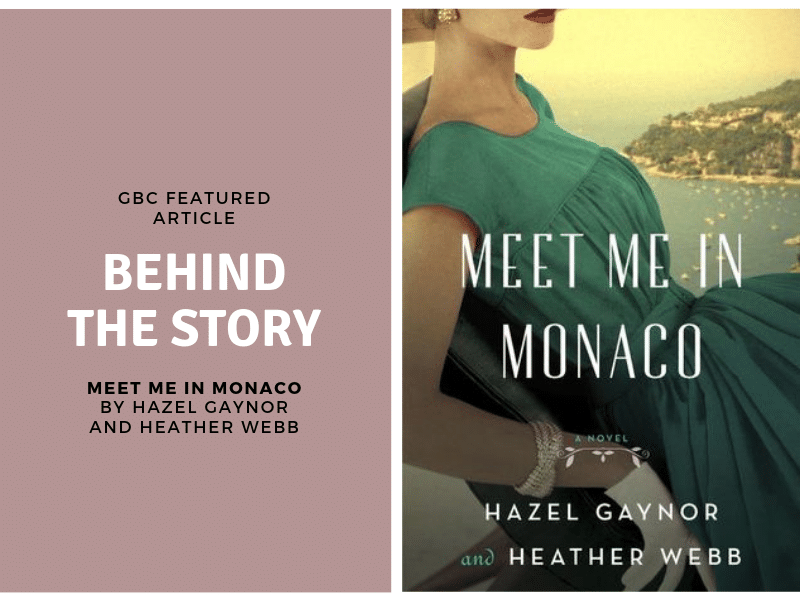 Set in the 1950s against the backdrop of Grace Kelly’s whirlwind romance and glamourous wedding to Prince Rainier of Monaco, New York Times bestselling author Hazel Gaynor and Heather Webb take the reader on an evocative sun-drenched journey along the Côte d’Azur in this page-turning novel of passion, fate, and second-chances.

Meet Me In Monaco by Hazel Gaynor & Heather Webb

Behind the Story Essay

Tragedy often brings out our real affection for someone, and perhaps this has never been more evident than in the shocking car crash that took the life of Princess Grace of Monaco so cruelly in September 1982. Reminiscent of the reaction that reverberated around the world after the sudden death of Diana, Princess of Wales, Princess Grace’s death was also a global event, and one we still talk about today.

After winning an Oscar at the age of twenty-six, and going on to marry Prince Rainier of Monaco shortly afterward, Grace’s private life played out in the most public way. Perhaps, like Diana, we felt we knew Grace in some way, and grieved for her, though most of us had never met her. But what influence might a woman like Grace Kelly have on those who came into contact with her, however briefly? This was the question we wanted to explore in writing Meet Me In Monaco.

We wanted to understand the very ordinary people caught up in a most extraordinary love-affair between an American actress and a little-known Prince. Who were the ‘invisible’ people who surrounded Grace in the weeks and days leading up to her wedding, and who were deeply affected by the untimely death of one the most loved stars of Hollywood’s golden era. We wanted to illustrate how Grace’s kindness, influence, and her brave sense of spirit touched the lives of many around her.

Our fictional characters—Sophie Duval: a passionate perfumer, struggling to secure her father’s legacy, and James Henderson: a press photographer searching for far more than Hollywood glamour through his lens—were inspired by real people and roles that were connected to Grace and the royal wedding in surprising ways. Our novelists’ gaze also wandered behind the scenes of those famous images of Princess Grace on her wedding day. Who was the woman behind the Hollywood smile? What were her private thoughts behind the public appearances?

There is – unsurprisingly – an awful lot written about Grace Kelly. Our research led us to many fascinating books and accounts of her life. Some were intimate family portraits, while others offered a more scandalous ‘tabloid style’ insight into Kelly’s life, her love life especially. One book in particular, written by one of Grace’s closest friends and bridesmaids, offered a fascinating insight into the emotions of a young woman sailing on the S.S. Constitution from New York towards a new life in Monaco, giving up everything she’d known for love. How strange that in 2018 we saw such striking similarities in the short romance and wedding between Prince Harry and Meghan Markle, an actress leaving her career and American home behind to take up a royal role as Duchess of Sussex. The second American princess, and history repeating itself.

Research is everything for a historical novelist, and between books and articles, old newsreels and newspaper reports, we discovered a tantalizing detail about Miss Kelly’s wedding dress being packed carefully among rolls of tissue paper scented with a perfume that had been especially made for her wedding day. Here was an unknown and very interesting angle to the story. Who was the perfumer who made that scent? And who were the harried photographers chasing the perfect shot of the most famous woman in the world, and whose frustrations at the lack of access to Grace caused near riots in the days leading up to the wedding.

Our research also took us on an incredible trip to Monaco to follow in Grace’s footsteps, as well as to the beautiful flower fields of Grasse on the Cote d’Azur, famous for its perfumes, and where our character, Sophie, has her fictional perfumery. To make our own perfume and step inside the famous perfume houses, whose history goes back centuries, brought goose bumps and plenty of fresh inspiration. Suddenly, Sophie and all her struggles and passions were real.

We were also intrigued by the idea of fates being intertwined and how a chance meeting with someone can set our lives on a very different course, as was the case with Grace Kelly’s rather impromptu meeting with Prince Rainier while she was at the Cannes Film Festival in 1955. This chance meeting with a Prince changed everything for Grace, just as our characters, Sophie and James’s, lives change after a chance encounter with Miss Kelly, and each other. The ‘what ifs’ are often the pivotal moments in life, after all.

Grace Kelly was far more than the icon of the silver screen, or the Princess she became. She was also a dear friend, a devoted daughter, a loving wife and doting mother. To many, she will always be epitomized by Howell Conant’s stunning photographs of her wedding day and Helen Rose’s exquisite peau de soi and lace dress—one of the most copied gowns in history—but it is in the less formal images, casual snap shots taken by family and friends, where we really see the true spirit of a woman who loved life, and had so much more to live for.

Through the lens of Sophie and James and their proximity to Grace Kelly during her transition from Hollywood star to Princess Grace of Monaco, we hope to have honored her memory, and brought her story to a new generation of fans, as well as showing a different side of her to those of us who have long admired her.