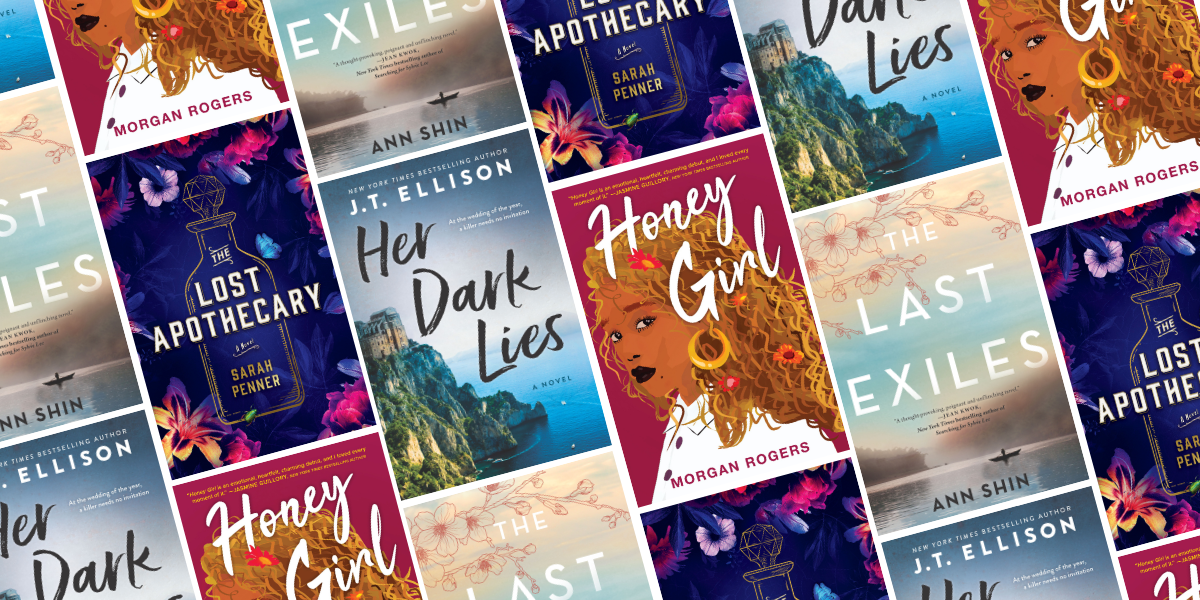 May's Book Vote brought to you by Harlequin Trade Publishing

Welcome to May's book vote! This month, we're trying something new - we've partnered up with Harlequin Trade Publishing to bring you four of their titles from a variety of genres and diverse authors. We hope you enjoy their selection.

One cold February evening in 1791, at the back of a dark London alley in a hidden apothecary shop, Nella awaits her newest customer. Once a respected healer, Nella now uses her knowledge for a darker purpose—selling well-disguised poisons to desperate women who would kill to be free of the men in their lives. But when her new patron turns out to be a precocious twelve-year-old named Eliza Fanning, an unexpected friendship sets in motion a string of events that jeopardizes Nella’s world and threatens to expose the many women whose names are written in her register.

In present-day London, aspiring historian Caroline Parcewell spends her tenth wedding anniversary alone, reeling from the discovery of her husband’s infidelity. When she finds an old apothecary vial near the river Thames, she can’t resist investigating, only to realize she’s found a link to the unsolved “apothecary murders” that haunted London over two centuries ago. As she deepens her search, Caroline’s life collides with Nella’s and Eliza’s in a stunning twist of fate—and not everyone will survive.

With crackling suspense, unforgettable characters and searing insight, The Lost Apothecary is a subversive and intoxicating exploration of women rebelling against a man’s world, the destructive force of revenge and the remarkable ways that women can save each other despite the barrier of time.

Jutting from sparkling turquoise waters off the Italian coast, Isle Isola is an idyllic setting for a wedding. In the majestic cliff-top villa owned by the wealthy Compton family, up-and-coming artist Claire Hunter will marry handsome, charming Jack Compton, surrounded by close family, intimate friends…and a host of dark secrets

From the moment Claire sets foot on the island, something seems amiss. Skeletal remains have just been found. There are other, newer disturbances, too. Menacing texts. A ruined wedding dress. And one troubling shadow hanging over Claire’s otherwise blissful relationship—the strange mystery surrounding Jack’s first wife.

Then a raging storm descends, the power goes out—and the real terror begins…

With her newly completed PhD in astronomy in hand, twenty-eight-year-old Grace Porter goes on a girls’ trip to Vegas to celebrate. She’s a straight A, work-through-the-summer certified high achiever. She is not the kind of person who goes to Vegas and gets drunkenly married to a woman whose name she doesn’t know…until she does exactly that.

This one moment of departure from her stern ex-military father’s plans for her life has Grace wondering why she doesn’t feel more fulfilled from completing her degree. Staggering under the weight of her father’s expectations, a struggling job market and feelings of burnout, Grace flees her home in Portland for a summer in New York with the wife she barely knows.

In New York, she’s able to ignore all the annoying questions about her future plans and falls hard for her creative and beautiful wife, Yuki Yamamoto. But when reality comes crashing in, Grace must face what she’s been running from all along—the fears that make us human, the family scars that need to heal and the longing for connection, especially when navigating the messiness of adulthood..

Jin and Suja met and fell in love while studying at university in Pyongyang. She was a young journalist from a prominent family, while he was from a small village of little means. Outside the school, North Korea has fallen under great political upheaval, plunged into chaos and famine. When Jin returns home to find his family starving, their food rations all but gone, he makes a rash decision that will haunt him for the rest of his life.

Meanwhile, miles away, Suja has begun to feel the tenuousness of her privilege when she learns that Jin has disappeared. Risking everything, and defying her family, Suja sets out to find him, embarking on a dangerous journey that leads her into a dark criminal underbelly and will test their love and will to survive.

In this vivid and moving story, award-winning filmmaker Ann Shin offers a rare glimpse at life inside the guarded walls of North Korea, and the harrowing experiences of those who are daring enough to attempt escape. Inspired by real stories of incredible bravery, The Last Exiles is a stunning debut about love, sacrifice and the price of liberty.