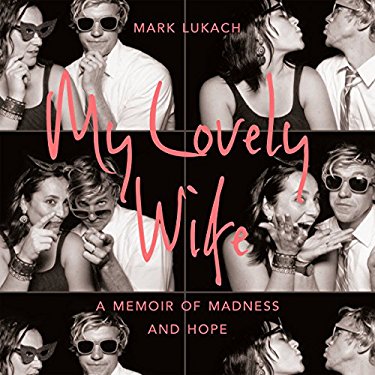 My Lovely Wife is the story of Giulia and Mark’s Lukach’s relationship with mental illness. It is a story of love and heartbreak, of “madness and hope”.

Giulia and Mark met at eighteen, fell instantly and intensely in love, and devoted their lives to each other. Nine years later and without warning, Giulia enters her first bout of psychosis. Delusional, suicidal and terrified, she is hospitalised for almost a month.

Five years, a son and another two psychotic breaks later, Mark Lukach publishes this beautifully written, heart wrenching memoir. Lukach deals with the story of his wife’s mental illness with hope, love and a tenacity that will reaffirm your faith in the power of love and devotion.

Relentless and raw in its honesty, My Lovely Wife forces every emotion out onto the table, to be prodded, played with and examined, before gently and lovingly putting it back where it came from.

Although Giulia’s journey is often distressing to read about, Lukach does not sensationalise or exploit her story to make this memoir one of horror in the psych ward or in the mind of the sufferer. It is instead an honest and intimate exploration of mental illness and especially how it effects those closest to the sufferer. This memoir not only examines the effect of Giulia’s psychosis on her own life, but also explores the anguish, anger and guilt-laced resentment Lukach had to deal with himself.

Although it would definitely interest me to hear this story from Giulia’s perspective, the story of Mark the husband, father and caregiver is just as important.

I would recommend this book for Girly Book Club, as I believe it would initiate a good and important conversation about mental health.