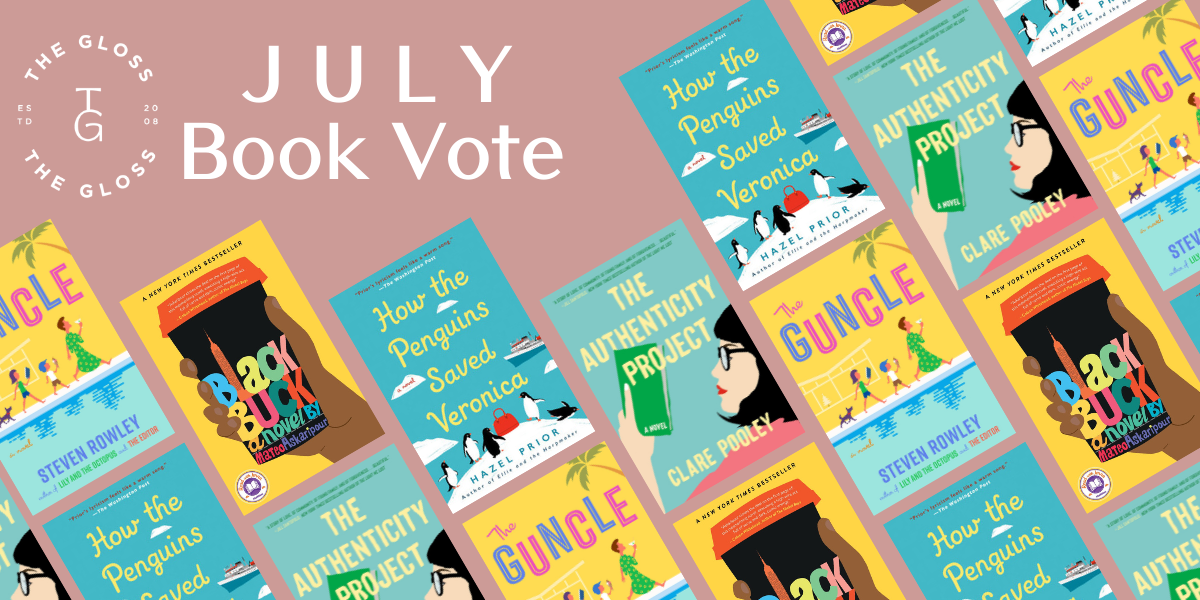 Welcome to July's book vote. This month, we're bringing you 4 contemporary fiction titles that we're excited by. You can't go wrong with this vote - something a little lighter for the summer months.

Patrick, or Gay Uncle Patrick (GUP, for short), has always loved his niece, Maisie, and nephew, Grant. That is, he loves spending time with them when they come out to Palm Springs for weeklong visits, or when he heads home to Connecticut for the holidays. But in terms of caretaking and relating to two children, no matter how adorable, Patrick is honestly a bit out of his league.

So when tragedy strikes and Maisie and Grant lose their mother and Patrick’s brother has a health crisis of his own, Patrick finds himself suddenly taking on the role of primary guardian. Despite having a set of “Guncle Rules” ready to go, Patrick has no idea what to expect, having spent years barely holding on after the loss of his great love, a somewhat-stalled career, and a lifestyle not-so-suited to a six- and a nine-year-old. Quickly realizing that parenting—even if temporary—isn’t solved with treats and jokes, Patrick’s eyes are opened to a new sense of responsibility, and the realization that, sometimes, even being larger than life means you’re unfailingly human.

With the humor and heart we’ve come to expect from bestselling author Steven Rowley, The Guncle is a moving tribute to the power of love, patience, and family in even the most trying of times.

For fans of Sorry to Bother You and The Wolf of Wall Street—a crackling, satirical debut novel about a young man given a shot at stardom as the lone Black salesman at a mysterious, cult-like, and wildly successful startup where nothing is as it seems.

There’s nothing like a Black salesman on a mission.

An unambitious twenty-two-year-old, Darren lives in a Bed-Stuy brownstone with his mother, who wants nothing more than to see him live up to his potential as the valedictorian of Bronx Science. But Darren is content working at Starbucks in the lobby of a Midtown office building, hanging out with his girlfriend, Soraya, and eating his mother’s home-cooked meals. All that changes when a chance encounter with Rhett Daniels, the silver-tongued CEO of Sumwun, NYC’s hottest tech startup, results in an exclusive invitation for Darren to join an elite sales team on the thirty-sixth floor.

After enduring a “hell week” of training, Darren, the only Black person in the company, reimagines himself as “Buck,” a ruthless salesman unrecognizable to his friends and family. But when things turn tragic at home and Buck feels he’s hit rock bottom, he begins to hatch a plan to help young people of color infiltrate America’s sales force, setting off a chain of events that forever changes the game.

Black Buck is a hilarious, razor-sharp skewering of America’s workforce; it is a propulsive, crackling debut that explores ambition and race, and makes way for a necessary new vision of the American dream.

Eighty-five-year-old Veronica McCreedy is estranged from her family and wants to find a worthwhile cause to leave her fortune to. When she sees a documentary about penguins being studied in Antarctica, she tells the scientists she’s coming to visit—and won’t take no for an answer. Shortly after arriving, she convinces the reluctant team to rescue an orphaned baby penguin. He becomes part of life at the base, and Veronica's closed heart starts to open.

Her grandson, Patrick, comes to Antarctica to make one last attempt to get to know his grandmother. Together, Veronica, Patrick, and even the scientists learn what family, love, and connection are all about.

The story of a solitary green notebook that brings together six strangers and leads to unexpected friendship, and even love.

Julian Jessop, an eccentric, lonely artist and septuagenarian believes that most people aren't really honest with each other. But what if they were? And so he writes--in a plain, green journal--the truth about his own life and leaves it in his local café. It's run by the incredibly tidy and efficient Monica, who furtively adds her own entry and leaves the book in the wine bar across the street. Before long, the others who find the green notebook add the truths about their own deepest selves--and soon find each other in real life at Monica's café.

The Authenticity Project's cast of characters--including Hazard, the charming addict who makes a vow to get sober; Alice, the fabulous mommy Instagrammer whose real life is a lot less perfect than it looks online; and their other new friends--is by turns quirky and funny, heartbreakingly sad and painfully true-to-life. It's a story about being brave and putting your real self forward--and finding out that it's not as scary as it seems. In fact, it looks a lot like happiness.

The Authenticity Project is just the tonic for our times that readers are clamoring for--and one they will take to their hearts and read with unabashed pleasure.