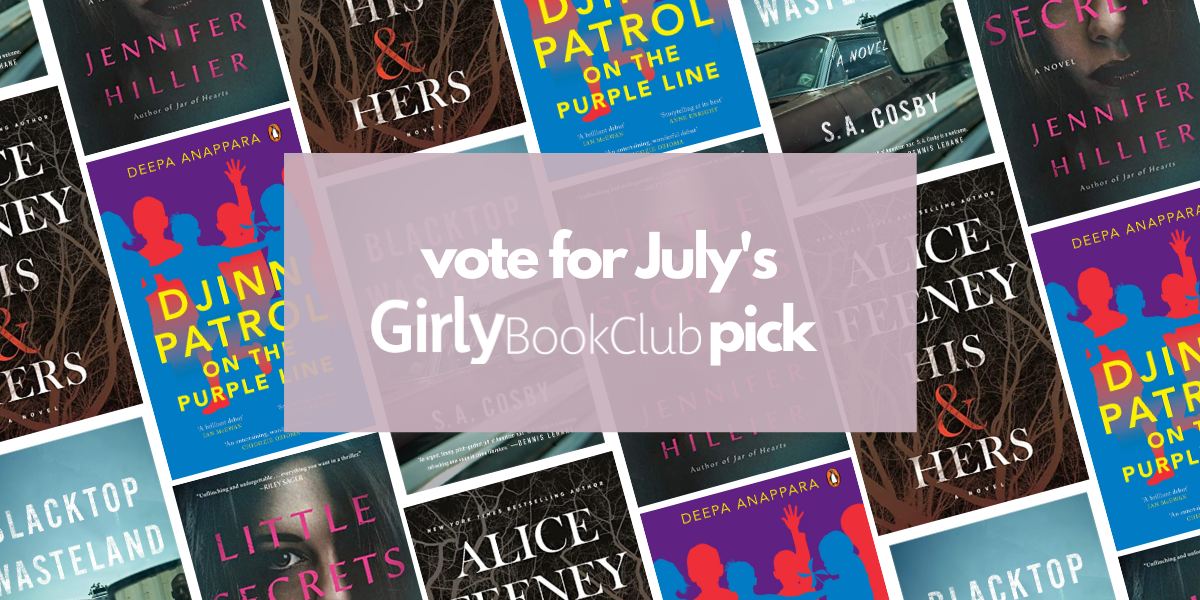 Welcome to July's book vote! This month, we'll be returning to a popular genre - Mystery/Thriller. Every month we're pleased to bring you a shortlist of contenders for our Monthly Girly Book Club pick. We work really hard to ensure the list includes only titles available in paperback in our main markets, making the book more accessible to our membership. We also try to include a variety of authors and genres. We spend hours and hours pouring over potential books, their release dates, costs and availability. We hope you enjoy our selection.

Djinn Patrol on the Purple Line

Three friends venture into the most dangerous corners of a sprawling Indian city to find their missing classmate.

Down market lanes crammed with too many people, dogs, and rickshaws, past stalls that smell of cardamom and sizzling oil, below a smoggy sky that doesn’t let through a single blade of sunlight, and all the way at the end of the Purple metro line lies a jumble of tin-roofed homes where nine-year-old Jai lives with his family. From his doorway, he can spot the glittering lights of the city’s fancy high-rises, and though his mother works as a maid in one, to him they seem a thousand miles away.

Jai drools outside sweet shops, watches too many reality police shows, and considers himself to be smarter than his friends Pari (though she gets the best grades) and Faiz (though Faiz has an actual job). When a classmate goes missing, Jai decides to use the crime-solving skills he has picked up from TV to find him. He asks Pari and Faiz to be his assistants, and together they draw up lists of people to interview and places to visit.

But what begins as a game turns sinister as other children start disappearing from their neighborhood. Jai, Pari, and Faiz have to confront terrified parents, an indifferent police force, and rumors of soul-snatching djinns. As the disappearances edge ever closer to home, the lives of Jai and his friends will never be the same again.

Drawing on real incidents and a spate of disappearances in metropolitan India.

Beauregard "Bug" Montage: husband, father, honest car mechanic. But he was once known - from North Carolina to the beaches of Florida - as the best getaway driver on the East Coast. Just like his father, who disappeared many years ago.

After a series of financial calamities (worsened by the racial prejudices of the small town he lives in) Bug reluctantly takes part in a daring diamond heist to solve his money troubles - and to go straight once and for all. However, when it goes horrifically wrong, he's sucked into a grimy underworld which threatens everything, and everyone, he holds dear.

Overwhelmed by tragedy, a woman desperately tries to save her marriage in award-winning author Jennifer Hillier's Little Secrets, a riveting novel of psychological suspense. All it takes to unravel a life is one little secret...

Marin had the perfect life. Married to her college sweetheart, she owns a chain of upscale hair salons, and Derek runs his own company. They're admired in their community and are a loving family—until their world falls apart the day their son Sebastian is taken.

A year later, Marin is a shadow of herself. The FBI search has gone cold. The publicity has faded. She and her husband rarely speak. She hires a P.I. to pick up where the police left off, but instead of finding Sebastian, she learns that Derek is having an affair with a younger woman. This discovery sparks Marin back to life. She's lost her son; she's not about to lose her husband, too. Kenzie is an enemy with a face, which means this is a problem Marin can fix.