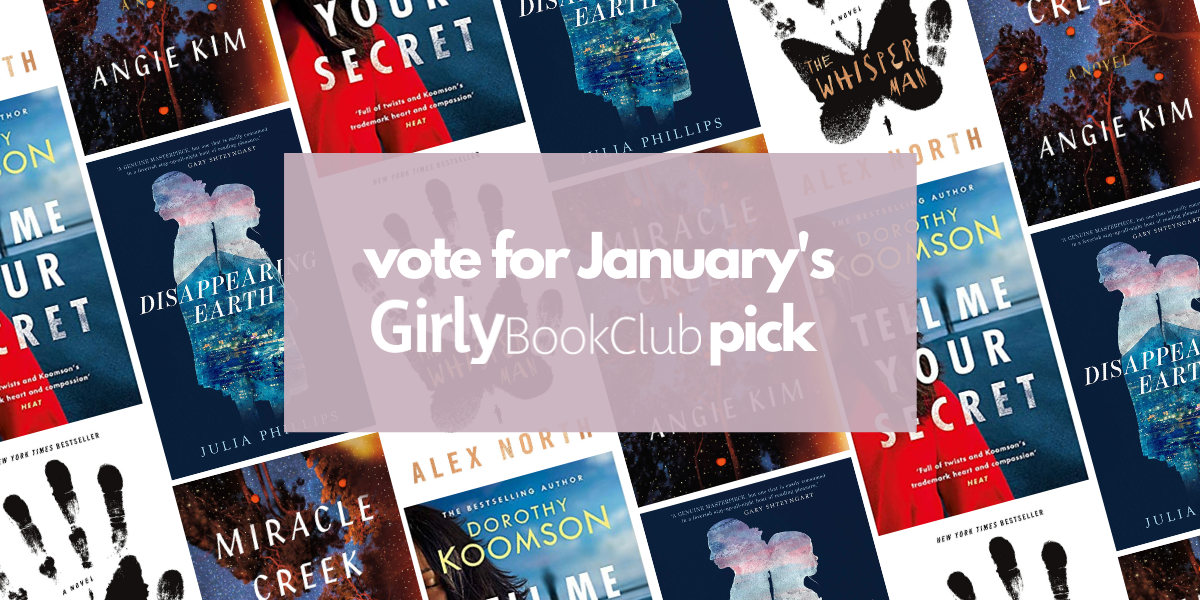 Welcome to January's book vote! This month, we'll be reading Psychological Thriller/Mystery. Every month we're pleased to bring you a shortlist of contenders for our Monthly Girly Book Club pick. We work really hard to ensure the list includes only titles available in paperback in our main markets, making the book more accessible to our membership. We also try to include a variety of authors and genres. We spend hours and hours pouring over potential books, their release dates, costs and availability. We hope you enjoy our selection.

How far will you go to protect your family? Will you keep their secrets? Ignore their lies?

In a small town in Virginia, a group of people know each other because they’re part of a special treatment center, a hyperbaric chamber that may cure a range of conditions from infertility to autism. But then the chamber explodes, two people die, and it’s clear the explosion wasn’t an accident..

A showdown unfolds as the story moves across characters who are all maybe keeping secrets, hiding betrayals. Was it the careless mother of a patient? Was it the owners, hoping to cash in on a big insurance payment and send their daughter to college? Could it have been a protester, trying to prove the treatment isn’t safe?.

After the sudden death of his wife, Tom Kennedy believes a fresh start will help him and his young son Jake heal. A new beginning, a new house, a new town. Featherbank.

But the town has a dark past. Twenty years ago, a serial killer abducted and murdered five residents. Until Frank Carter was finally caught, he was nicknamed "The Whisper Man," for he would lure his victims out by whispering at their windows at night.

Just as Tom and Jake settle into their new home, a young boy vanishes. His disappearance bears an unnerving resemblance to Frank Carter's crimes, reigniting old rumors that he preyed with an accomplice. Now, detectives Amanda Beck and Pete Willis must find the boy before it is too late, even if that means Pete has to revisit his great foe in prison: The Whisper Man.

One August afternoon, on the shoreline of the north-eastern edge of Russia, two sisters are abducted. In the ensuing weeks, then months, the police investigation turns up nothing. Echoes of the disappearance reverberate across a tightly woven community, with the fear and loss felt most deeply among its women.

Set on the remote Siberian peninsula of Kamchatka, Disappearing Earth draws us into the world of an astonishing cast of characters, all connected by an unfathomable crime. We are transported to vistas of rugged beauty – densely wooded forests, open expanses of tundra, soaring volcanoes and the glassy seas that border Japan and Alaska – and into a region as complex as it is alluring, where social and ethnic tensions have long simmered, and where outsiders are often the first to be accused.

In a story as propulsive as it is emotionally engaging, and through a young writer's virtuosic feat of empathy and imagination, this powerful novel provides a new understanding of the intricate bonds of family and community, in a Russia unlike any we have seen before.

Tell Me Your Secret

Ten years ago, Pieta was kidnapped by a man calling himself The Blindfolder who said he wouldn't kill her if she kept her eyes closed for 48 hours. She never told anyone what happened to her, vowing to move on with her life. But when The Blindfolder starts hunting down his past victims, Pieta realises she may finally be forced to tell her deepest secret to stay alive

Jody has a secret. Fifteen years ago, policewoman Jody made a terrible mistake that resulted in a serial killer known as The Blindfolder escaping justice. When Jody discovers journalist Pieta survived an attack by him, she realises she may finally have found a way to catch him. But that would mean endangering at least two innocent people . .