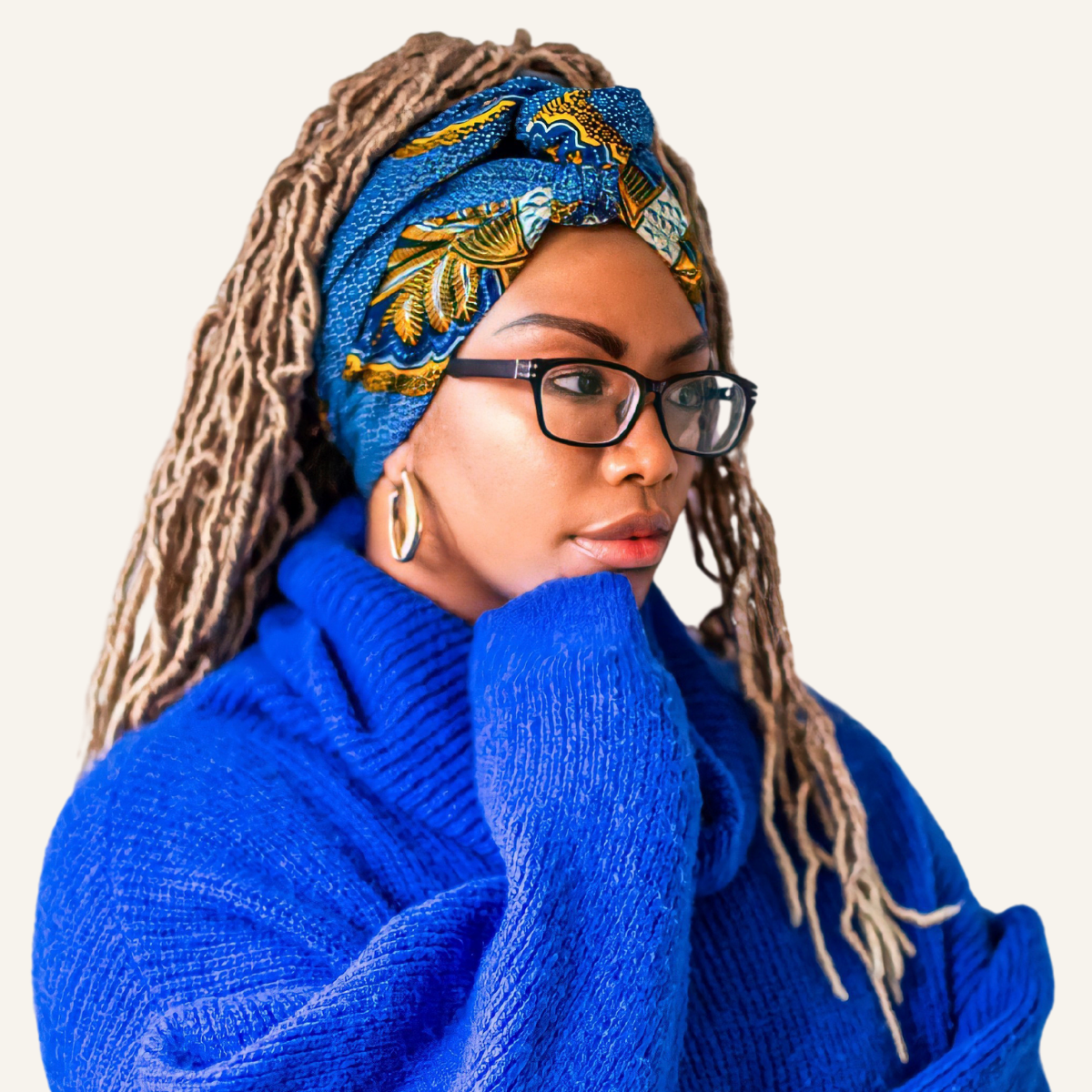 Onyi Nwabineli is a Nigerian British head-wrap aficionado. Born in Benin, Nigeria, she grew up in Glasgow, the Isle of Man and Newcastle, and now lives in London. Onyi is the cofounder of Surviving Out Loud, a fund that provides fiscal support for survivors of sexual assault, and the founder of Black Pens (black-pens.com), a writing retreat for Black womxn. Someday, Maybe is her debut novel. Visit Onyi at www.onyi-nwabineli.com.

The Gloss Book Club: What can you tell our members about your debut novel Someday, Maybe?

Onyi Nwabineli: It’s a story that explores the messy and unpredictable nature of grief, of human relationships, of love and of mental illness. This means that some of the characters are polarising but I think, or rather I hope, that many will see elements of themselves in one or more of the characters. It is also interwoven with components of Igbo language and culture; something that is extremely important and very dear to me.

TGBC: Where did the inspiration for Someday, Maybe come from?

ON: The short answer is I was asked to write it. The longer explanation is that a dear friend of mine lost her spouse, and my bumbling attempts to sit with her and support her in her grief were repeatedly met with the request that I write about grief and more specifically the grief that follows the unexpected loss of a loved one. I resisted for a long time. I had no idea how to turn such pain into words. But she was insistent and I did what I could to appease her – what I eventually presented to her was not a novel but her encouragement led me to develop a plot for Someday, Maybe and put it out into the world hoping it might resonate with someone.

TGBC: Did you weave any aspects from your own life or personal experiences into this novel?

ON: I think every writer consciously or subconsciously leaves pieces of themselves in their work. Being Nigerian and Igbo specifically, I made sure that my heritage and ethnicity was strongly represented in the novel, and there are some other very vague similarities to some of my own personal experiences that are scattered throughout the book, but it does remain a work of fiction albeit one built on a very real collection of emotions.

ON: I would say that trying to adequately portray the untidiness of grief was particularly challenging. Balancing that with the urge to tie things in a neat bow when life rarely works that way meant that this novel went through seven drafts before I worked up the courage to send it to a single agent. Family, mental illness and suicide are such heavy and critical themes that there is a lot of pressure to ensure that they are handled with care. I wanted to do my absolute best.
The most rewarding part of writing the novel was experiencing grief myself, reading back over some of the words I wrote and thinking that is exactly how I am feeling. I think I got something right!

TGBC: What was an early experience where you learned that language had power?

ON: My parents have always been pillars in their community (and have a wonderful knack for seeking out and building community no matter where they find themselves). One of my fondest memories of my Dad was sitting in a church hall and listening him hail a good friend of his in both English and Igbo. Looking around and watching the reaction to his words—the expressions on faces, the vocal responses, the way he was approached afterwards by people who had been touched by what he said. I realized that language exists not only to communicate but to link you to people and to people. I have been in love with it since then.

TGBC: You have a background in English and creative writing; what got you into writing to begin with and what inspired you to pursue this path?

ON: I would say my imagination drove me to write. As a very small kid, I made my own entertainment by acting out stories all around the house. My older siblings quickly went from teasing me about it to encouraging me. My parents put a pen in my hand and told me that I could also write my imagination and I haven’t stopped writing since then. It just makes me incredibly happy (as well as frustrating me to no end).

TGBC: Do you have any particular or interesting writing “quirks”?

ON: I don’t know that I would call it interesting or even a quirk but I only write short stories without a very detailed plot and character plan. Anything longer than 5,000 words and my brain begins asking me what exactly it is I think I am doing. I will write a synopsis, a chapter outline, character outlines, and keep a OneNote book full of “snippets” that come to me in the dead of night. I have also been known to simply delete entire chapters because to me, the alternative is setting fire to my laptop.

TGBC: What makes a book great, in your opinion? What elements does a great story possess?

ON: Beautiful language used effectively! Whether that means writing interesting and diverse characters, sparkling dialogue, a strong opening or all of the above, I think the use of language is what makes or breaks a story. I would also add that in my personal experience, originality, pacing and characters are what keep me turning pages.

ON: I have so many! But Fremont by Elizabeth Reeder is a book I think everyone should read. It is absolutely beautiful.

TGBC: What’s next for you? What can you tell us about your second novel?

ON: This year has been very, very busy. I set up Black Pens, a UK-based writing retreat for Black womxn and we had our inaugural retreat in July which was such a great success. I am already planning the 2023 retreat, working my full-time day job, running a side business and yes, I am working on my second novel. Without giving too much away, I will say that it is very much a product of the zeitgeist and once again centers on family and more specifically parents and their relationships with their children