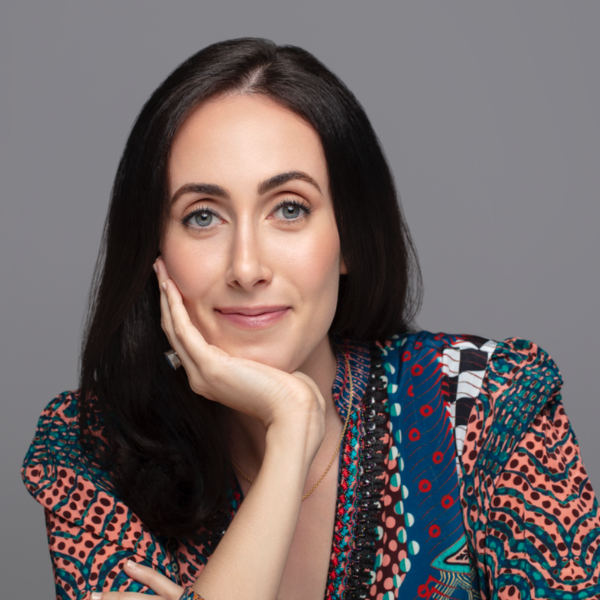 Nikki Erlick is a writer and editor whose work has appeared online with New York Magazine, Harper's Bazaar, Newsweek, Cosmopolitan, Indagare Travel, The Huffington Post, and Vox. She has a Bachelor’s degree from Harvard in Comparative Literature and a master’s degree from Columbia University in Global Thought. The Measure is her debut novel. Visit Nikki at www.nikkierlick.com.

The Gloss Book Club: What can you tell our members about your debut novel, The Measure?

Nikki Erlick: The Measure imagines what might happen if everyone were suddenly given the chance to learn how long they will live. The story follows eight ordinary people grappling with this extraordinary choice, as their fates gradually intertwine in a world irrevocably altered.

TGBC: Where did the premise of The Measure come from? What inspired you to write this novel?

NE: I’ve always been drawn to big questions: How much control do we have in our lives? How much power we have over our destiny? In our happiest moments and our most challenging times, it’s easy to wonder: Was it fate that led me here? I wanted to see if I could tackle these big questions in the form of a story, because I’m someone who has always turned to stories and to books to help me make sense of the world and navigate its many complexities.

As I was wondering how to craft a story about as complex a topic as fate, I remembered the ancient Greek vision of fate. I was fascinated by these figures of the Three Fates, who had this immense power to spin the strings of life on their spindle and measure out the amount of time that each of us would receive. I couldn’t help but wonder, what if? What if we were able to see our strings? How would that impact our world? What would we do with that knowledge?

The decision to have the strings arrive in a box for each person came a little bit later, when I realized that I wanted people to have a choice of whether or not they would look at their string. Even if the characters’ fates are pre-determined in one sense, they still retain a sense of power and agency when it comes to choosing whether or not they wish to know, and then, of course, choosing how to use that knowledge. The box itself was inspired by another famous Greek myth, that of Pandora’s Box, as the ultimate test of willpower: Can you resist the temptation to look?

TGBC: The Measure is told from multiple points of view; by using this writing device, were you able to cover more of the varying viewpoints and beliefs surrounding this topic?

NE: For a book that now has a large ensemble, the story was actually conceived with far fewer characters. I first imagined it as a love story between a person with a long string and a person with a short string, but the more time that I spent in this world, the more I kept thinking about different types of people and wondering how they would respond to this extraordinary scenario. How might a doctor react to the strings, if it’s their job to save lives? And how might a soldier react, when they’re knowingly entering a dangerous profession? And how might a politician even use this life-altering moment to influence the socio-political landscape? The wider cast of characters really grew out of all those questions that I just couldn’t shake, and I felt compelled to explore each of them through their own characters and storylines. I think I probably could have kept going and adding even more characters—after all, there are as many potential interpretations of the strings and reactions to their arrival as there are humans on this earth—but I had to stop myself somewhere!

TGBC: What were you aiming to invoke in your readers with this novel? Or was it more self-exploratory?

NE: Just like the arrival of the strings prompts different responses in each character, I imagine that the takeaways from this story will vary for each reader, depending upon the aspects of the story that they connect with the most. But I do hope there is an overarching message that we can all “measure” our lives in our own way, finding fulfillment and meaning and happiness in the way that feels right to us. Living life to the fullest means something different to each character in this novel, the same way it does to each one of us. Despite the differences that may exist between us—and despite the amount of time we’ve each been given—everyone’s life has equal impact, value, and purpose. Personally, I have always felt that reading is an adventure in empathy, so if my novel is able to contribute even the smallest amount to adding a little more empathy to our world, inspiring people to view others with compassion and to view themselves with compassion, that would be enough for me.

TGBC: If you received one of the boxes you write about in your novel and could learn the exact number of years you will live, would you open it? Why or why not?

NE: Admittedly, my answer to this question changed on a day-to-day basis while writing this book, seeing the value in both decisions, but I think I’ve settled on not opening my box, at least for now. I would probably hide it away somewhere, but I wouldn’t get rid of it, either, since I’m open to the possibility that I might change my mind!

TGBC: We understand a TV adaption is development. Do you have any information you can share about that?

NE: I can’t reveal too much right now, but I’m thrilled that the book has been optioned by an incredible production company whose mission to not only entertain but also to inspire feels so aligned with my own hopes in writing The Measure. This world and these characters have lived inside my imagination for so long now that I’m very excited to see how somebody else’s imagination can transform this story for a new medium, allowing an even greater array of stories and perspectives within this world to be explored.

TGBC: While this is your first novel, it’s not your first foray into writing; your work has been featured on the websites of New York Magazine, Harper’s Bazaar, and Cosmopolitan, to name a few. Has publishing this book changed your process of writing?

NE: My main takeaway from writing this book, in terms of process, is the benefit of outlining. I had a very loose outline for this novel—I knew the essentials of the beginning, middle, and end—but I ultimately wrote my way through to a lot of decisions. During the revision process, I realized that having a more detailed outline to refer back to would probably have saved me a lot of headaches! My goal for a future novel is to create a more in-depth outline from the start.

NE: I’m very excited to connect with readers once The Measure is out in the world. After that, I’m hoping to write another novel!