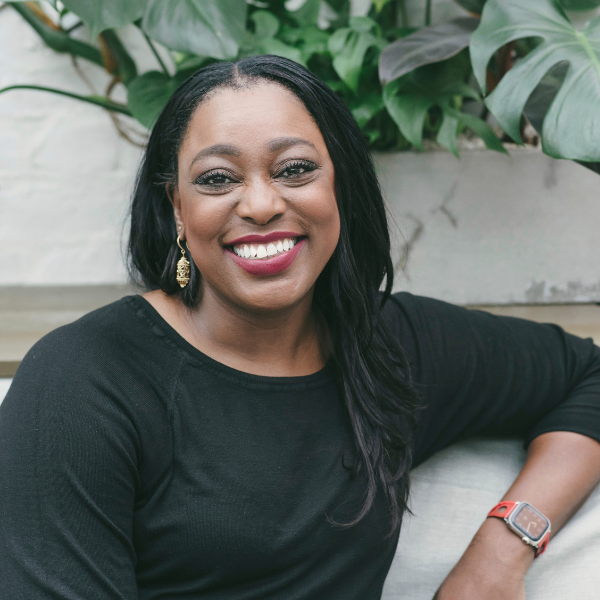 Nadine Matheson is the author of The Jigsaw Man, a thriller in the Detective Anjelica Henley series. She is a criminal defense attorney and winner of the City University Crime Writing competition. She lives in London, UK. Visit Nadine at www.nadinematheson.com.

The Gloss Book Club: What can you tell our members about your novel The Binding Room?

Nadine Matheson: The Binding Room is the second book in the Inspector Anjelica Henley series. It begins when Henley and Ramouter are sent to investigate the murder of a popular pastor who is found murdered in his church in South East London. Whilst searching the church, Henley discovers a concealed room that has been set up for torture. In the middle of the room, bound to the bed is the body of a young man. When another body is found in similar circumstances, Henley realizes that someone is out there torturing people as part of a dark ritual. There is nothing to connect the victims and it’s up to Henley to find the murderer before another innocent person is killed.

TGBC: When you began writing The Binding Room’s predecessor, The Jigsaw Man, did you know it would be the first book of a series?

NM: No, I did not. I initially wrote The Jigsaw Man as part of my creative writing master’s degree, which meant that my focus was primarily on finishing the book in order not to fail my course. It wasn’t my intention to even study creative writing, but I’d won a competition where the prize was a bursary to attend City, University of London and enrol in a creative writing MA. My competition entry was a story about a murdered pastor, and as soon as I completed The Jigsaw Man I knew that I wanted Inspector Henley and the Serial Crime Unit to investigate the pastor’s murder. Also, I felt that I was learning more about Henley. She became more alive once I started working on the edits of The Jigsaw Man, and I knew that she had more stories to tell.

TGBC: Will there be further books in the Inspector Anjelica Henley series, and if so, how many books do you hope to write?

NM: Absolutely. I’m currently working on Book 3 in the series, and I also have a plan for Book 4. I’m looking forward to keeping the series going for as long as possible.

NM: Henley and the Serial Crime Unit will be investigating a series of twenty-five-year-old murders after the man convicted of the crimes has his conviction overturned, and the real killers resume his murderous campaign.

NM: It’s very difficult to get the balance right because you want existing readers to feel as though they’re reading a new story in a familiar world and with characters that they’re invested in, but you don’t want new readers to feel as though they’ve been invited to a party where all the other guests know one another and are gossiping behind their back. You don’t want to offend your existing readers by simply repeating significant parts of the previous book. The trick is to simply drop in hints about a character’s experience in a previous book, but not have it be a distraction that takes focus away from the main story. I think that the most important thing is to make sure that the world that your characters inhabit is as authentic and grounded as possible, which enables a new story to breathe on its own.

TGBC: What appeals to you about writing this genre?

NM: I love jigsaw puzzles. As I child, I was always drawn to the puzzles section of the games cupboard in school, and I still enjoy puzzles as an adult. The crime genre gives me the opportunity to create a grand and intricate puzzle for the reader and to see if they can solve it. The genre is also so much more than writing about a crime; for me, it’s having the opportunity to examine how a crime impacts not only the victims and their families, but also the detectives investigating the crimes. Writing crime also gives me the opportunity to examine what motivates people to act in ways that should shock us.

TGBC: Does your experience as a criminal solicitor shape or aid your writing—especially in your crime/mystery novels?

NM: Most definitely. First, working as criminal solicitor meant that I was used to writing to deadlines, and I knew the importance of having a clear structure that was easy to follow when drafting legal arguments, but also when writing a jury speech. I realized that when you’re working on a case, everyone is telling a story. The prosecution’s goal is to present a convincing story that will persuade a jury to convict my client and as a criminal defence solicitor, I’m doing the same, but I obviously want the jury to acquit my client. I’m constantly thinking, “What is the story of this case, and what can I do to make sure that the jury or judge is invested in the right outcome for my client?” I apply those same principles to my writing. Also, and I feel most importantly, my experience as a solicitor taught me that defendants, victims and witnesses in a case are not clichés and stereotypes. I fully understood that everyone involved in a case had their own unique stories and are fully realized individuals. It’s so important to me that my characters in my novels are authentic and multifaceted, and being a criminal solicitor enables me to remember that no one is simply just a thief or a murderer; they are someone’s son or wife or best friend. In other words, they’re not just defined by their crimes.

TGBC: Have you ever used real-life scenarios as inspiration for your novels or included any aspects of true events in your writing?

NM: I haven’t used entire cases or based a character on the entire personality or backstory of one of my clients, but I have been inspired by a unique personality trait of a client, or an interesting fact about one of my cases. For example, I had a client who was basically a fraudster, and I remember visiting his flat and thinking to myself that his flat didn’t feel lived in, and that it smelled like a charity shop. It turned out that I was right, and my client was only pretending that he was struggling financially. He actually lived in a multimillion-pound house in an expensive part of London. It was those subtle moments of deceit that inspired a scene in The Jigsaw Man, but with The Binding Room I was strongly inspired by a real case of a family killing another family member when they’d attempted an exorcism. I honestly feel that my legal career has provided me with the best research library and has enabled me to come up with interesting characters and storylines that don’t feel fake or sensationalized.

TGBC: Are you a plotter or a pantser—both with regard to writing individual books and also writing the book series?

NM: Most definitely a plotter. It doesn’t matter whether I’m writing a standalone, series or a short story, I will aways have a plan. I learned a very long time ago that I will not get very far without a plan. In the past I’ve written stories that have ground to a halt at the twenty-thousand-word mark because I had absolutely no idea as to what should happen next. I create a plan for every novel so I know exactly what will happen in the beginning, middle and end of my story, but I don’t stick to it rigidly. I think of my plans as more of a safety net. I have somewhere to go if my story or a character is a bit lost, but I won’t panic and hit the delete button if a new and unplanned subplot or a new character organically enters the story. I’m very comfortable with having room in my plan to incorporate something new, and I actually find that exciting.

TGBC: What are you reading now?

TGBC: What is your all-time favourite book?

NM: That is a difficult question because I have books that make my favourite list for so many different reasons, but I would say that The Joy Luck Club is my favourite book, which might be surprising because it’s not a crime novel, but it does contain a mystery that you have to unravel.