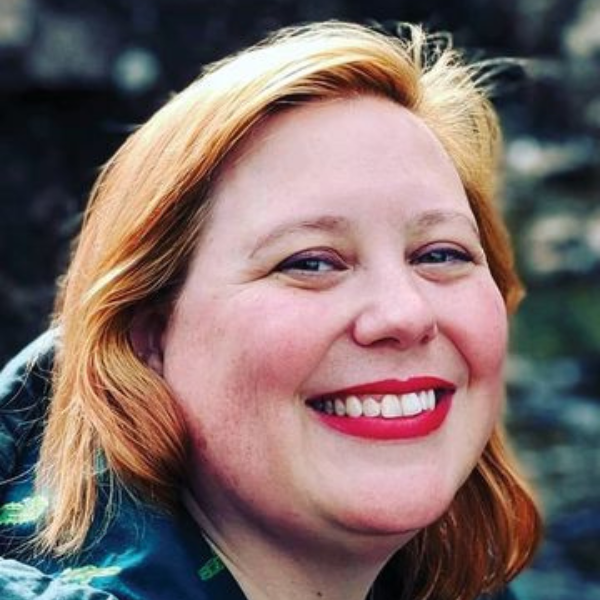 Erin Sterling also writes as Rachel Hawkins, the New York Times bestselling author of multiple books for young readers. Her work has been sold in more than a dozen countries. She studied gender and sexuality in Victorian literature at Auburn University and currently lives in Alabama. Visit Erin here.

The Gloss Book Club: What can you tell our members about your novel The Kiss Curse?

Erin Sterling: The Kiss Curse is the follow up to The Ex Hex, so we’re back in Graves Glen, Georgia just in time for Halloween! Gwyn Jones is looking forward to the town’s busiest season and the business it brings to her magical shop, Something Wicked, when she suddenly has to deal with a new coven in town, the mysterious loss of her powers, and- worst of all in her mind- Wells Penhallow showing up to open his own store directly in competition with hers. When the two have to team up to defeat the latest evil in Graves Glen, sparks fly in every sense.

ES: I am definitely one of those writers who always adds in edits, so very rarely does anything end up on the cutting room floor. However, in this case, there’s a whole half of a first draft abandoned on my laptop because when I first started the book, I gave Gwyn the wrong love interest! Which is apparently a thing that sometimes happens in writing romance! I liked this other character very much (and he’s getting his own story soon!), but he and Gwyn just did not work out on the page. And not even in the fun sexy way!

TGBC: Will readers see the return of characters from the book’s predecessor, The Ex Hex?

ES: Oh, yes! Vivi, Rhys, Elaine, Bowen, Simon, and MOST importantly Sir Purrcival are all accounted for! It was so fun to get to go back to those characters and see them through new eyes.

TGBC: You also write thrillers, as Rachel Hawkins; has that influenced The Ex Hex series – perhaps with the paranormal angle?

ES: I love this question! I definitely feel like both sides of my writing career influence each other. I think writing thrillers helps me with the slightly twisty plotting of the romances (there’s almost always a mystery to solve in the romances, plus a fair amount of action scenes), and I think being a romance novelist makes my thrillers sexier and a little more emotional. I always say I truly get to Hannah Montana It- Best of Both Worlds!- by getting to do a Murder Book and a Kissing Book every year!

TGBC: Will there be further books in this series, and if so, how many books do you hope to write?

ES: There will indeed! I’m working on the 3rd one right now, and I think that will feel like a good stopping place in terms of the Graves Glen books. When I first started writing, I was a YA author, and trilogies were all the rage, so I think I still have my writing brain stuck on, “Three! Three is a perfect number of books!” 🙂  BUT! I’ll have a standalone paranormal romcom (with a twist!) out in 2024 or 2025, and I’m already planning another Spooky Series set in a brand new smalltown. (There will probably be three of those, too. Seriously, the hold trilogies have on me!)

ES: It’s such a tricky needle to thread, wanting the books to satisfy both readers who read the previous books and feel welcoming and easy to understand for newcomers, too. I know I love as a reader when I can jump into a series and not feel lost, so it’s definitely something I think about as I’m working. I think that’s really the key, just keeping that in mind as I go, remembering that I might need to take a beat to catch readers up to speed, but also not spending 4 pages being like, “A Brief Summary Of All That Came Before.” I also sometimes revist books that I think have done this particularly well and try to figure out how they did it.

TGBC: Are you a plotter or a pantser – both with regards to writing individual books and also writing the book series?

ES: I was a pantser for YEARS, but when I moved over to thrillers, I had to start plotting preeeettty thoroughly, and now I really don’t like starting a book without a 10-12 page outline. Nothing fancy, no capital letters or Roman numerals, just a succinct, “Here’s everything that happens.” That lets me draft faster, and it means that I work out all the issues or plot holes or, “Wait, does all this happen over the course of two days??” stuff before I’m 45,000 words into a Word doc and staring at a blinking cursor in panic. However, I still let myself be really flexible, so if I’m writing and a new plot twist or scene or whatever occurs to me that wasn’t in the outline, I go ahead and write it. So the outline is definitely a map, but sometimes I like to do a little off-roading. 🙂

ES: Writing contemporary romance is especially satisfying to me because you get to take familiar characters and settings and remind people that there’s magic and romance in our everyday world. Also, on a shallower note, it means I don’t have to do a ton of research, and this is good because I am one of those people who will absoLUTEly spend 4 hours down a Wikipedia rabbit hole all because I was trying to figure out when people first started making jigsaw puzzles or something. (Around 1760, by the way.) AND it feels like such a fun evolution of the years I spent writing YA. My characters were teens in the 2010s, so they’d all be in their late 20s now, and I like the idea that on some level, I’m writing those same characters, just at different phases in their lives.

As for the thrillers, I mean, who doesn’t love getting dark and twisty sometimes? I love plotting those, figuring out all the red herrings, lies, alibis, etc. And I love writing Ladies Doing Bad Things, let’s be real.

TGBC: How did you get into writing and what inspired you to write your first novel?

ES: I’ve been writing in one way or another my whole life, but it wasn’t until I was nearly 30 that I sat down to write an actual book. That novel, Hex Hall, ended up being my first published book, and I wrote it because I was teaching high school at the time, and, while digging into books for my students to read, really fell in love with YA as a genre. It felt like a good fit for my Writerly Voice, plus at the time, I was really ready to move from teaching into something that still involved books and kids, but did not involve grading essays. 😉 I always say Hex Hall is my love letter to everything I adored in the YA books I was reading- boarding schools, witches (an interest I clearly carried over when I started writing for adults), girls figuring themselves out, friendship, forbidden love…it was so much fun to write, and it felt like such a cool full circle thing to, ten years later, come back to a similar vibe in The Ex Hex.

ES: I have a new thriller coming out from Rachel Hawkins on January 3rd (The Villa), and then the third Graves Glen book (title to come!) out in Fall 2023. I’m currently working on a new thriller for 2024, and have a Swinging London-Set Gothic RomCom (IT’S A THING!!!) for Avon up after that. I am, as the kids say, Booked and Busy, and extremely grateful for that!