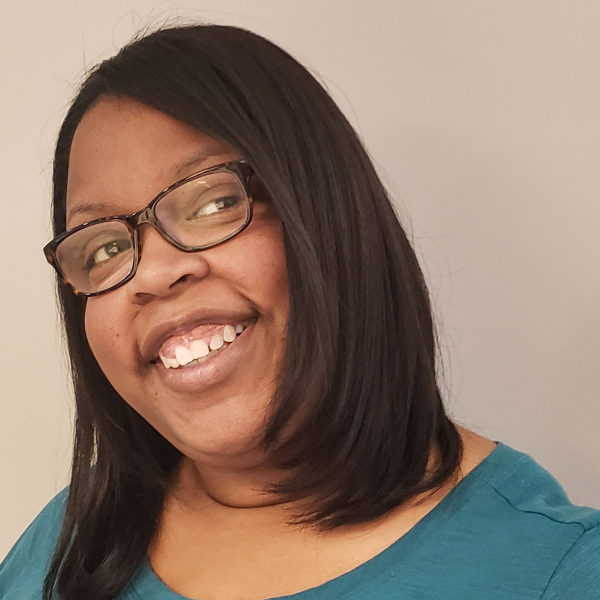 Catherine Adel West is a writer/editor living on the South Side of Chicago. Her experience as a black woman shapes every aspect of her writing and she is sure to be a voice for many women. Her work has been published in Gay Magazine, Black Fox Literary Magazine, Five2One, Better than Starbucks, Doors Ajar, 805 Lit + Art, The Helix Magazine, Lunch Ticket, and most recently Kaaterskill Basin Literary Journal. The Two Lives of Sara is her second novel. Visit Catherine at www.catherineadelwest.com.

The Gloss Book Club: What can you tell our members about your novel The Two Lives of Sara?
Catherine Adel West: The Two Lives of Sara is a story that’s both heartfelt and heartbreaking in parts, but that doesn’t take away from the moments of joy and humor. It’s a story about the choices one woman makes in her joys and her grief and the caution that comes with the things we do and say that we can’t take back.

TGBC: The Two Lives of Sara chronicles the life of a young black mother in Memphis, Tennessee, in the 1960s. Why was this an important story to tell?
CAW: I wanted to draw attention to the sometimes impossible decisions that come with both black womanhood and black motherhood. There are a few books that focus on this issue, but not nearly enough. There are so many facets to being a black woman in this nation, but particularly being a black woman where there’s (to me) an almost unimaginable “othering” of who we are and how we contributed to our homes, our cities and this country.

TGBC: How did you do the majority of your research for this specific time period and location?
CAW: My research was split between books, news articles, even academic papers along with in-person interviews with those who live(d) in Memphis, and, of course, online research. I needed all of these to properly research the 1960s and the city of Memphis, Tennessee.

TGBC: When researching for The Two Lives of Sara, what was the most surprising thing you learned?
CAW: I think I didn’t realize how many boarding houses for black travelers there were. And, tragically, how few of them still currently exist. But in this way, I’m not terribly surprised at the erasure of black history and even the logistical ways we went about surviving in this country in order to contribute to it.

TGBC: What was the most challenging element during your writing process of The Two Lives of Sara?
CAW: I wanted to evoke a sense of time and place and presence that’s authentic, which is difficult to do if you weren’t alive at the time. But the interviews I did with some native Memphians absolutely lent the authenticity I sought.

TGBC: Your characters are all very charismatic and engaging; How important is character development to you over plot?
CAW: Both are equally important. You can’t have a plot with boring characters because readers won’t be engaged enough to move forward. And you can’t have fun and intriguing characters who just go about different antics with no sense of why their actions are important or why their actions will cause them to grow as people. You need both for the story for readers to keep turning the page and to eventually to give them some kind of closure. So, for me, characters and plot go hand in hand.

TGBC: How did you get into writing and what inspired you to write your debut (and predecessor) Saving Ruby King?
CAW: I’ve written in one form or another for most of my life. I wanted to be able to write but I still needed to make a living to be able to do it. So I got a couple of degrees in journalism. I made a living as an editor and though I was somewhat fulfilled by what I did, I still wanted to use my skills creatively. I wrote short stories in my free time, and at a wedding, a college buddy suggested I turn one of them into a novel. That was the story that became Saving Ruby King.

TGBC: Did publishing your first book change your process of writing, and if so, how?
CAW: I pantsed Saving Ruby King because I had no idea how to write a book or what went into it. It took five years to write the first draft, and another six months of deep revisions to find literary representation. For The Two Lives of Sara I had to outline it, as the publisher needed an outline and three sample chapters before they agreed to acquire it. It took about five months to write the first draft for The Two Lives of Sara. I still love to pants a book. And now that I know what I’m doing, I don’t think it’ll take me five years to write another one.

TGBC: What makes a book great, in your opinion? What elements does a great story possess?
CAW: I love a book with a plot that surprises me. Characters that make me feel all the emotions. I want to laugh out loud. I want to cry. I want to throw the book across the room in anger. I think the best books give you characters that damn near become real people to you. I need a book I think about at odd moments; a book I evangelize to almost every person I meet. That makes a great book to me.

TGBC: What do you aim to invoke in your readers through your novel writing?
CAW: My hope is my readers take the full emotional ride of my main character, Sara King. I want them to laugh with her, cry with her—not condone all of her choices but understand them and who she is.

TGBC: What was an early experience where you learned that language had power?
CAW: I remember my mom reading my brother and I bedtime stories. I would lie in bed entranced by the books. I always thought it was powerful that words were able to get me to shut everything out and focus on the story in front of me. And I wanted that power—the power to captivate with words.

TGBC: What was the last book you read that you loved?
CAW: I can’t pick just one. So, I’ll give you several. A Little Life by Hanya Yanagihara; Savvy Sheldon Feels Good as Hell by Taj McCoy; Love Times by Lane Clarke