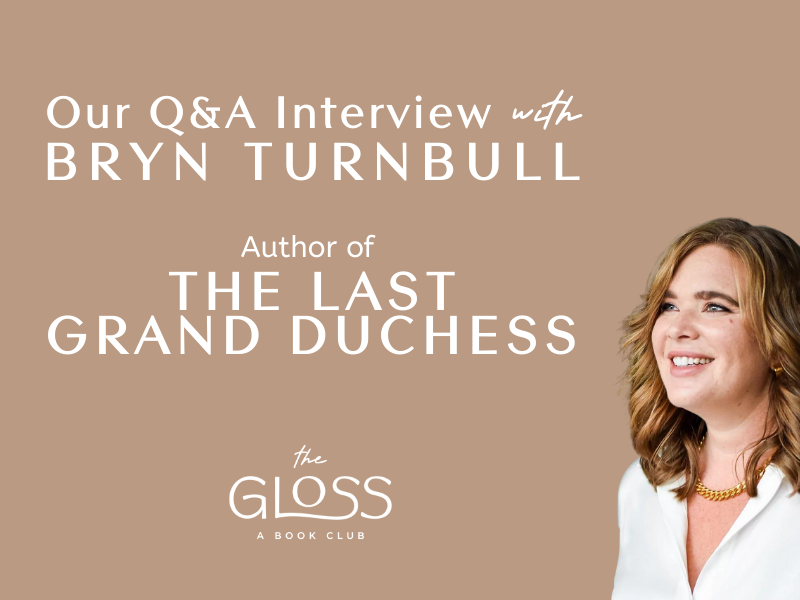 Bryn Turnbull is a writer of historical fiction with a penchant for fountain pens and antique furniture. Equipped with a master of letters in creative writing from the University of St. Andrews, a master of professional communication from Ryerson University, and a bachelor’s degree in English literature from McGill University, Bryn focuses on finding the stories of women found within the cracks of the historical record. She lives in Toronto. Visit her at www.BrynTurnbull.com

The Gloss Book Club: What can you tell our members about your novel The Last Grand Duchess?

Bryn Turnbull: The Last Grand Duchess tells the story of the tumultuous downfall of the Romanov dynasty, as seen through the eyes of Nicholas II and Alexandra’s eldest daughter, Olga Nikolaevna. Beginning on the night of Nicholas’s abdication, Olga witnesses not only the rise of the Bolsheviks, but also the many steps that led to the Russian Revolution – including the declaration of war against Germany and her parents’ relationship with the mystic Grigori Rasputin. The novel also follows Olga’s personal life in the years leading up to the abdication: her desire to be more than her title, and to find fulfilment outside of the cloistered world of the imperial palace.

TGBC: What drew you into the story of Grand Duchess Olga Romanov that made you want to write a historical fiction novel through her eyes?

BT: In the history books, Olga and her sisters are frequently written about as a unit – OTMA, an acronym formed by their first initials – and while the sisters were unusually close it felt like a disservice to have so much attention given to Anastasia’s pretenders, rather than to the sisters themselves. When I started looking into who Olga was, I found so much that confirmed she was more than the shrinking violet I’d previously thought her to be: she was headstrong and passionate, and had a strong sense of duty not only towards her family, but also towards those less fortunate than herself.

As the eldest of the daughters, she was also more politically aware than many give her credit for. More than one contemporary source notes that when Grigori Rasputin was assassinated, Olga acknowledged that while she disagreed with how it happened, she knew the deed had to be done for the good of the country.

TGBC: What kind of research do you do for this novel and how long do you spend researching before beginning a book?

BT: I love the research phase of a project – to be completely honest, I find I’m never actually “done” researching. I did about a year’s solid research before putting pen to paper for this book, but once I started writing I found there was always some other fact or other to confirm! I tend to start any book by building a historical timeline, month by month and year by year, so that my characters’ actions can align closely to the broader historical record, and from there I like to do a deep dive into the individual characters. If I can find diaries or voice recordings, that’s solid gold. In a book like The Last Grand Duchess, accurately reflecting the book’s many locations is particularly important: while I couldn’t travel to Russia (thank you, pandemic), I found that there were so many online resources that enabled me to immerse myself in the setting.

TGBC: When researching for The Last Grand Duchess, what was the most surprising thing you learned?

BT: I most enjoyed learning about some of the lesser-known figures at the court of Nicholas II. Everyone is familiar with the idea of Rasputin, if not always the facts, but Dr. Vera Gedroits deserves to have a book written about them on their own merits. They were the first female military surgeon in Russia, the first woman to serve as a physician to the imperial household, and they presented openly as male. Though one might think that they would face personal and professional challenges given the time and place in which they lived – and I’m sure they did – they achieved great success and were quite close with the Imperial family, serving as attending physician to the imperial children. Jim Hercules is another character who I would love to see a novel written about one day – he was a Black American who served as an arap in the imperial court, and was known for bringing back jars of homemade jelly for the imperial children after visiting his mother in the United States.

BT: I’d originally written a whole segment of the book that took place on board Nicholas II’s yacht, the Shtandart, and at Livadia Palace, the Romanovs’ summer residence in Crimea. It would have been lovely to include them — describing the gardens alone was such fun — but at the end of the day you have to make decisions on what’s best for the plot.

BT: I enjoy writing about real historical figures, so for me the challenge lies in striking the balance between fact and fiction. Occasionally I get a note from a reader telling me that it wasn’t raining on such and such a day, but the fact of the matter is, if I was concerned with telling you each and every fact and figure related to a historical person, I wouldn’t be writing fiction. My job is to do the research and make judicious choices to get at the heart of a historical figure and reflect what isn’t in the history books. I do my utmost to approach historical people with respect and understanding, in the hopes that if they were to read my work one day, they would see themselves reflected in the words.

TGBC:  What makes a book great, in your opinion? What elements does a great story possess?

BT: A great story can’t rely on character or plot alone: it needs to have both a compelling personal or character arc as well as a cracking good plot.

TGBC: How did you get into writing and what inspired you to write your first book, The Woman Before Wallis?

I’ve always been a writer, pretty much from the time I started reading – I can’t tell you how many stapled-together stories of mine my parents have stored away in their basement! – so when I started writing a novel I don’t think it came as a surprise to anyone. That said, I’d always assumed it was something I’d get to later in life, after having a corporate career; however, one night after working my desk job I watched a movie about Edward VIII and Wallis Simpson, and encountered the character of Thelma Furness. The next day, she walked into my head and refused to leave until I’d written a book about her.

BT: My favourite books are those that are so consuming they transport you utterly to another time and place: when you can nearly smell a character’s perfume over your shoulder, or you simply can’t stop turning the pages. If you’ve got a “book hangover” after reading my novel – when you look up in surprise at how much time has passed, or you want to learn more about the setting and the characters after you’ve finished the last chapter – then I feel I’ve done my job well.

TGBC:  If you had to write your next novel in a genre other than historical fiction, what genre would it be and why?

BT: I have such respect for writers of science fiction and fantasy. Writing historical fiction, I can assume that my readers have at least some basis of knowledge about the time and place in question; likewise, authors who write contemporary novels can assume that their readers know something about the social cues that govern their characters’ decision-making. Writers of science fiction and fantasy don’t always have those foundations to build upon; in many cases, they’re working with an entirely blank slate, not only writing the story but creating the world, the history, the social context and the rules of engagement that govern their characters’ actions. That’s a whole other level of intricacy.