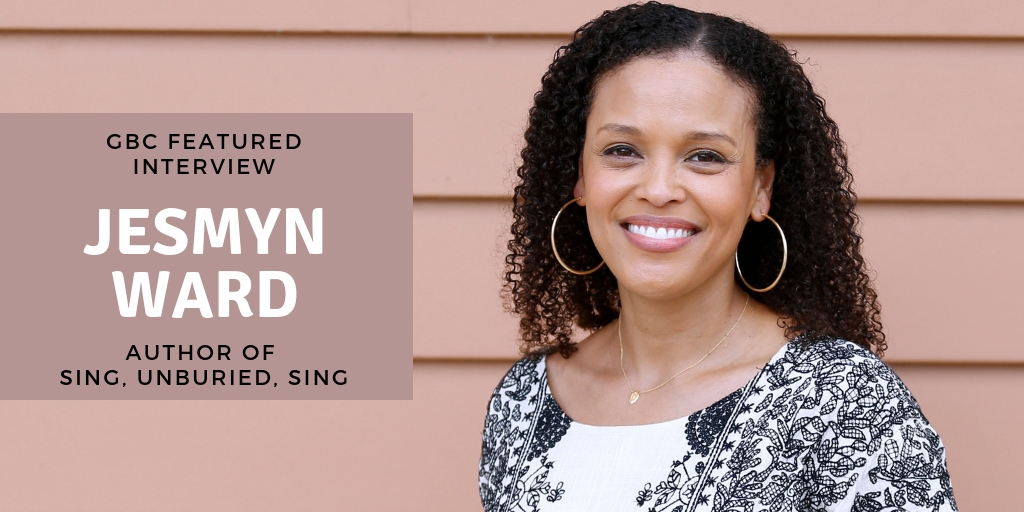 Jesmyn Ward is an American novelist and author of a number of books including – obviously – the GBC’s September title, Sing Unburied Sing, along with Salvage the Bones and her memoir, Men We Reaped. Jesmyn is the first woman to win the US National Book Award for fiction TWICE – a huge, and very well deserved, accolade.

We were fortunate enough to host our Virtual Girly Book Club meeting with Jesmyn, who provided some amazing insight into Sing Unburied Sing. We wanted to share the highlights from the interview with you here:

Girly Book Club: For those who have read Sing, Unburied, Sing, what do you hope they take away from the novel?

Jesmyn Ward: I hope the characters stay with the reader after they have turned the last page, and I hope that when they encounter people who resemble my characters in real life, they will feel more empathy for them.

GBC: You give a great sense of the family’s home in the story. How much of it, if any, was drawn from the setting where you grew up?

JW: The place where I grew up informs all my work. I live in my hometown now. The people here feel a real connection to the land and to the history of Mississippi. But the particular house and setup of Jojo’s family was all imagined.

GBC: How are you inspired by your community and the people within it when creating and developing characters?

JW: Well, I want to write about people who resemble the people in my family and my community. So I remember that when I am thinking about character motivation or character background. I think about them when I’m imagining the kinds of issues my characters might be struggling to overcome.

GBC: How much of the storyline of Sing, Unburied, Sing did you have crafted before you actually began the writing process? Which came first: the plot or the characters?

JW: I never craft plot first. The characters are always the essence of the story. They always draw me to a particular place and time.

GBC: Did you know before you began that you were going to include the supernatural element of the ghosts, specifically Given and Richie?

JW: I had no idea I would write about ghosts until I began researching Parchman prison and found out that children as young as Richie were imprisoned and enslaved there. When I found out children like Richie existed, then I knew I had to write a ghost.

GBC: As a writer, is it difficult to create a character such as Leonie, one who may be easy to judge and hard to empathize with?

JW: Leonie is the hardest character I’ve ever written. It can be difficult to work my way past my personal reservations about a character, to move beyond judgement and find the vulnerability in a character.

GBC: Why was it important for you to write about Parchman Prison in this novel?

JW: It was important to write about Parchman because it is the essence of the tortured history of this state and region, distilled to a real place, where as recently as the 1950s, people were enslaved. And it certainly speaks to our current situation, our drive to lock people up, wherein the United States jails more people than the rest of the countries in the world combined.

GBC: Identity and representation are important topics in literature at the moment. To what extent do you think the stories we write need to be grounded in our own personal experiences versus telling stories from perspectives that are less personal to us?

JW: I think inclusivity is important, that people who have not had the ability to see themselves in literature definitely need to have that option. However, I hesitate to say that writers should write about one thing or another. I think writers should write about whatever they wish to, and that they should strive to do it well. If my identity aligns with my interests and my creativity, then so be it.

GBC: Does the lyrical style of your writing come naturally to you or is it something you consciously inject into the story?

JW: I always think about figurative language, about the power and scope and reach of that language, from the rough draft to the final draft. I think it comes naturally to me, that it is a component of my voice, but that doesn’t mean that I don’t have to work at it.

GBC: Is there a book that inspired you as an author or early reader before you wrote novels? Which books did you read immediately before writing Sing, Unburied, Sing?

JW: I’ve been an avid reader since I first learned how to read. I’ve always loved books about smart, headstrong girls. And I reread a couple of books before I began writing Sing: the most important were Corregidora and As I Lay Dying.

GBC: Tell us a little about your writing habits: where do you write from? Do you write daily or in bursts?

JW: I write daily, whether I feel like it or not. 5 days a week, for at least two hours per day.

GBC: What are you working on now? What’s next for you?

JW: I’m currently working on a novel set in New Orleans at the height of the domestic slave trade. And I’m also working on a YA/middle grade book featuring a magical heroine at the same time.