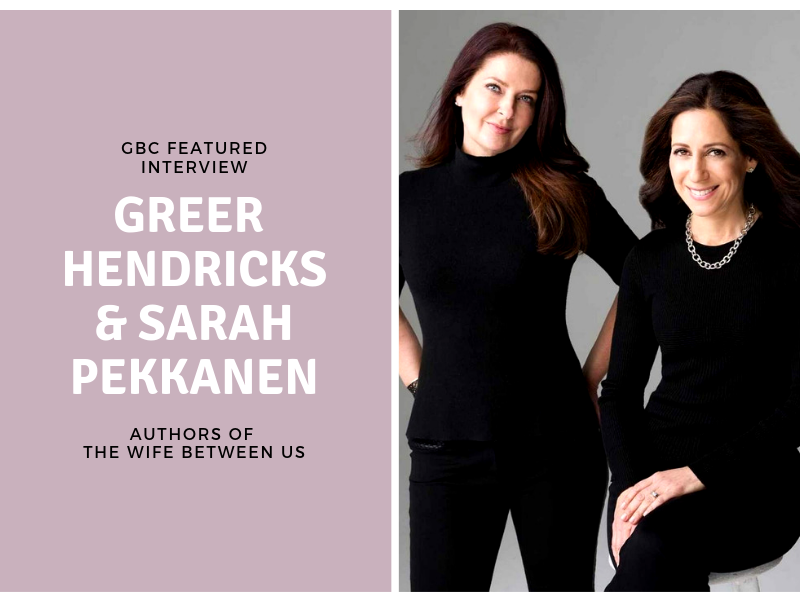 Greer Hendricks and Sarah Pekkanen’s editor-author relationship began in 2010 with Pekkanen’s debut novel, The Opposite of Me. Their connection was instant, and eight years later, the duo released their debut novel together, The Wife Between Us.

Girly Book Club: How did you get into writing and what inspired your first book?

Sarah Pekkanen: I began working as a journalist straight out of college, penning features for newspapers and magazines. It was a terrific training ground for a novelist. I discovered writing is a craft, not an art. Sentences can always be tweaked; scenes can be re-written. But if you don’t get out that initial draft, you’ll just stare at a blank page all day. Although I didn’t know it at the time, working as a reporter gave me other tools I’m grateful to have as a novelist. For example, my comfort level with shifting conditions: I can write in noisy, busy places because newsrooms are pretty chaotic (I actually wrote part of my first novel at Chuck E. Cheese’s!), but I can also write from the passenger’s seat in a moving car, on the sidelines of the soccer field, or in my quiet-until-the-kids-get-home living room.

When I left my newspaper job to take up a different one – staying home with my boys – a void formed in my life. I’d been writing since I was a little girl who sent books with titles like Miscellaneous Tales and Poems to top New York publishers (I’m still sort of stunned that one never got picked up – hey, the poems all rhymed)! I missed writing the way you’d miss a best friend who’d abruptly disappeared from your life. So one night I took a glass of wine up to my computer and began to type… and a few years later, I had my first solo novel. I wrote seven novels on my own (which Greer edited!) before Greer and I teamed up on our debut, The Wife Between Us.

Greer Hendricks: When I was a young girl I wrote songs, poems, and stories. I took a few creative writing classes in college and went on to study journalism at Columbia. After I graduated, I got a job in the editorial department at Simon & Schuster to support myself. I spent 20 amazing years there as an editor working with talented writers, such as Jennifer Weiner, Lauren Weisberger, Taylor Jenkins Reid, and Stephen Chbosky. Then, after nearly two decades at the same company, I was itching for a change. In the back of my mind, I wanted to try to write a novel of my own. Although I didn’t tell many people, I confided in Sarah, who suggested we write a book together. By that point, Sarah and I knew we shared strikingly similar narrative instincts and approaches to storytelling. When we discovered we were both eager to write a psychological page-turner – one as twisty, complex, and fresh as possible – it almost seemed predestined. That novel turned into The Wife Between Us, our debut.

GBC: Is it easy or difficult writing a book with another author? What do you do when you don’t agree?

GH & SP: We are writing partners for life. Our second novel, An Anonymous Girl, will be published January 8th, 2019, and we’re hard at work on our third book together. We’ve also been hired by Steven Spielberg’s company, Amblin Entertainment, to write the screenplay for The Wife Between Us, which is incredibly thrilling.

We even have matching shirts that say “Better Together,” because we love our collaborative process. We are incredibly close friends – really more like sisters at this point. We are so in tune that we frequently come up with the exact same sentence, or thought, at the same moment. On the rare instances we don’t agree on a direction in our writing, we talk it out. And we both welcome that process, because our strong belief is that if something is not working for one of us in the manuscript, then it isn’t working, period.

GH: A great book is one that kidnaps me. It forces me to ignore my family, stay up past my bedtime and convinces me to skip my morning workout.

SP: A good book has an engine. You fall under its propulsive spell, and you can’t stop turning the pages. The characters are so vivid you feel like you’d recognize them if you met them on the street. A great book has all of those things – and it’s also one you think about long after you’ve finished.

GBC: What are you doing if you’re not writing?

GH: Spending time with family and friends, running (I am working on increasing speed and mileage), reading, watching movies, and listening to podcasts.

SP: Hanging out with my three sons, checking out rescue dogs on Petfinder (we recently lost our beloved 14-year-old lab rescue, Bella, to cancer), reading, working out, planning adventures with my boyfriend (last year we climbed a mountain and flew a plane together), and often texting or talking to Greer!

GBC: Name your favourite bookshop in the world.

GH: My favorite book store is only a few blocks from my apartment in New York City. It’s a small independent called The Corner Bookstore, appropriately named because it’s on the corner of Madison Avenue and 93rd Street.

SP: Noooo, I can’t pick one! I’ll chose three that are local to me: One More Page in Virginia, Politics & Prose in DC, and A Likely Story in Maryland.

GBC: Physical book, e-book, or audiobook? – and why.

GH: I love all three formats depending on the situation (home, travel, commute). I am an author’s dream because I often consume a book in multiple formats.

SP: I don’t listen to many audiobooks, but I devour e-books and physical books. I always have an e-book or two going on my phone so I can read if I unexpectedly need to wait somewhere, and a stack of novels rests on my nightstand.

GBC: What was your favourite book as a child?

GH: Harriet the Spy. I actually still have my childhood copy. It’s one of the few books I’ve saved.

SP: The Nancy Drew series, and a beautiful hardback copy of Little Women that my grandmother gave to me one Christmas.

GBC: What is one movie, TV series, or podcast that you’re loving right now?

GH: Homecoming. I listened to it as a podcast with Catherine Keener and I am now watching the television series with Julia Roberts.

SP: Serial the podcast. I’m deep into The Alibi and it’s fascinating. I worked as a feature writer for The Baltimore Sun, and The Alibi digs into a long-ago murder in Baltimore, so I’m familiar with the terrain.

GBC: We’re always on the hunt for our next great read. Recommend us a book to add to our TBR pile!

GH & SP: Bad Blood is narrative nonfiction at its finest. The shocking story of the rise and fall of Theranos, the multibillion-dollar biotech startup created by a young, brilliant, female Stanford dropout. We devoured this book. Elizabeth Holmes could have been a villain in one of our novels!