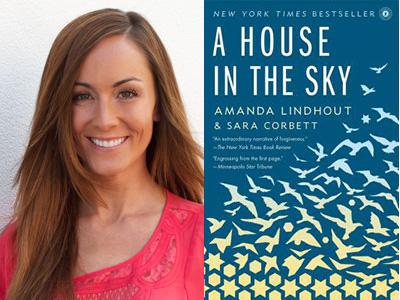 This book was released in 2013 – but I have a very good reason to be reviewing it now. Which I’ll let you know at the end of this review.

A House in the Sky by Amanda Lindhout is a memoir that briefly covers a difficult childhood, a young adventurous woman looking for change then it changes gear as we travel with Amanda to Latin America, Laos, Bangladesh, and India. She becomes more and more confident as a traveler and begins her career as a journalist. Traveling to Sudan, Syria, and Pakistan. In Afghanistan and Iraq she gives television reporting a go –  and then, in August 2008, she traveled to Somalia, despite many people telling her not to go. After being in Somali for four days with her cameraman they are both abducted and held for ransom for over 400 days.

A House in the Sky is Amanda’s story of captivity and her eventual escape. It’s completely compelling, heart wrenching and unputdownable.

While in Somalia, Amanda was dealing with a host of unthinkable circumstances – during which the captors had got in touch with Amanda’s mom, Lorinda Stewart to arrange the ransom payment of $2.5 million. One Day Closer came out this week and is Lorinda’s retelling of those 460 days when she tried everything to set her daughter free.

Check it out here!