Our 5 Picks for a Summer Getaway 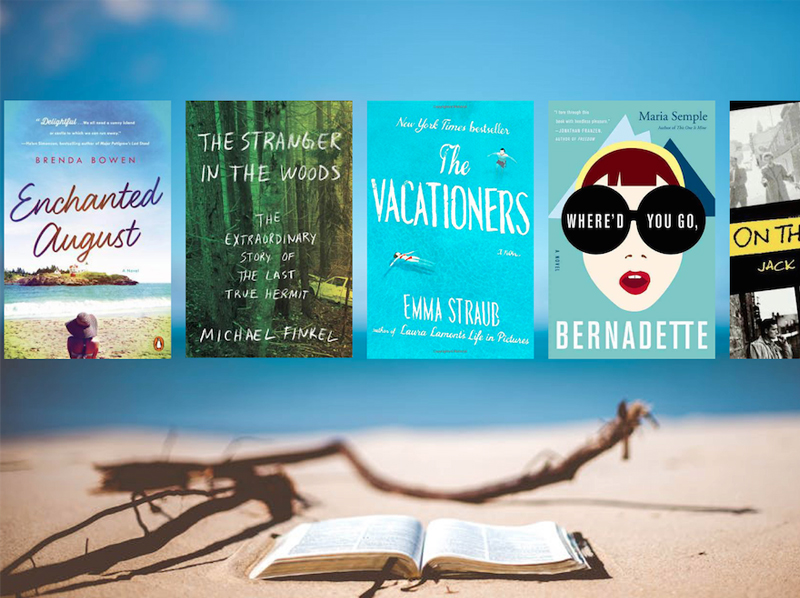 You know those books that seem to be best enjoyed on the beach with a daiquiri in hand? Or perhaps dockside, feeling the subtle wake of a passing motorboat on the lake? They’re the type that you just seem to gravitate toward in the warm summer months when you’re feeling an easy-to-pick-up and quick-to-blow-through read. Yeah, those.

We’ve put together our five picks catered toward your next summer getaway. Whether you’re camping, beaching, cottaging, boat cruising, or road tripping, we’ve got you covered with our round up of novels to pack in your getaway bag.

Pack for: a long weekend camping trip in the backcountry

The Stranger in the Woods: The Extraordinary Story of the Last True Hermit by Michael Finkel

Get ready to escape your creature comforts and get lost in the deep woods, with nothing between you and the elements but a nylon tent. Finkel’s work is a biographical retelling of Christopher Knight (the man dubbed the North Pond Hermit), a smart and shy 20-year-old who disappeared into the Maine forest to live his dream of escaping modern life to live in complete solitude. Knight spent nearly three decades without having a single conversation with another human being, until he was arrested for stealing food. Take in this book by the campfire and place yourself in Knight’s boots, as you ponder leading a life of seclusion in the woods.

Pack for: a sunny, breezy holiday at the beach

The Vacationers by Emma Straub

As you’re loading up your bag for that holiday at the beach, be sure to pack a copy of The Vacationers in with your towel and sunscreen! The Post family head off to the Spanish island of Mallorca in the Balearic Sea with extended family and friends, along the intentions of celebrating Franny and Jim’s 35th wedding anniversary and their daughter Sylvia’s high school graduation. Among the island’s stunning beaches and mountains, the tensions that were expected to ebb away with each passing day in paradise, actually mount and explode with secrets spilled, rivalries revealed, and old wounds dug up. Emma Straub’s novel dives right into the brilliance of family dysfunctionality, through wry humour and a big heart.

Pack for: that ever-anticipated trip to the cottage

Enchanted August follows Lottie Wilkes and Rose Arbuthnot as they pursue a lovely cottage rental on a small island in Maine for a brief month-long escape from their hectic and busy lives in Brooklyn. They recruit Caroline Dester, an indie movie star seeking her own escape from a public humiliation, and Beverley Fisher, an elderly woman healing from a devastating loss, to help share the quaint cottage’s pricey rent. While it may seem like an odd quartet, the ladies begin to open up and reveal their stories to one another. Brenda Bowen’s Enchanted August is a brief respite from your every day routine and an entertaining escape for your cottage getaway.

Pack for: that bucket-list boat cruise you’ve finally embarked upon

Whether you’re catching rays on the ship deck, sipping elaborate cocktails in the lounge, or simply relaxing in your cabin, Where’d You Go, Bernadette is the perfect cruise complement. After the disappearance of her agoraphobic architect mother, Bernadette Fox, 15-year-old Bee attempts to understand what’s happened to her mother, with the hopes of tracking her down. Semple’s writing is witty and fun, as she tells this story both through collected correspondence and documents relating to Bernadette and Bee’s interjected interludes. A simultaneously heart-warming and hilarious read that’s perfect for an indulgent vacation.

Pack for: an ambitious yet carefree road trip with friends

On The Road by Jack Kerouac

You didn’t think we could go this whole list without including a classic, did you? Jack Kerouac’s On The Road is the epitome of freedom and a novel that – while based on Kerouac’s own life – seemed to define the generation of that time. On The Road follows narrator Sal Paradise and his friend Dean Moriarty, a charismatic free-spirit with a carefree attitude and sense of adventure, who serves as an inspiration for Sal’s travels. This novel is full-on Americana in the late 1940s, scattered with jazz, poetry, and drug-use. It should go without saying that Kerouac’s quintessential work is best enjoyed while on a road trip, with late nights spent listening to music and sleeping under the stars.