The Alice Network by Kate Quinn (A Review by Erin Woodward) 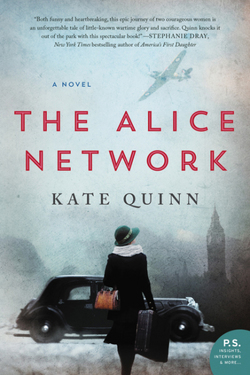 An intense multi generational World War novel with some of the most unconventional, yet increasingly lovable characters.

Quinn sets the scene by introducing us to a haggard old witch, Eve, brandishing a lugger, drunk and cursing. As the story progresses we come to understand that Eve’s past as an international spy in both World Wars has been anything but a walk in the park and we’re taken along as she looks to settle old scores.

We also meet American socialite Charlie, who after losing her brother to the Second World War (so to speak) has become so unfeeling and unconnected that she’s ended up in the family way without knowing quite whom the father is – which is a big faux pas – especially in 1947.

These two women form an unusual friendship that takes them on a journey of self-discovery and redemption. It’s a hefty read – but once you begin you’ll need to see these characters through to the end.