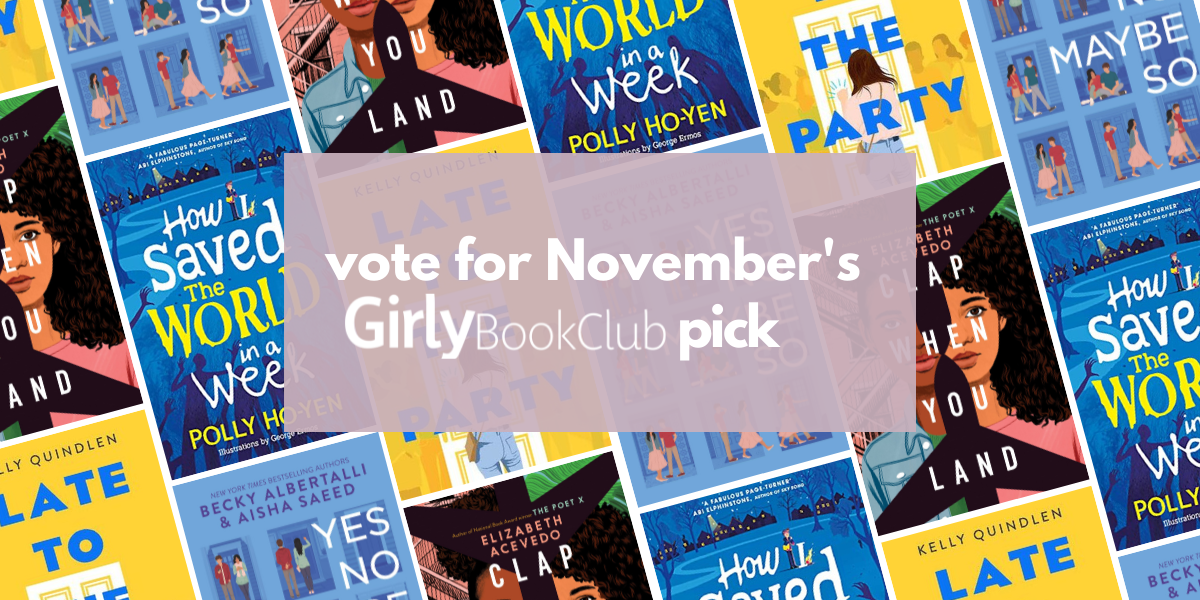 Welcome to November's book vote. This month, we are revisiting the exciting genre of YA/contemporary fiction. There are so many great books and authors in this genre we had a hard time narrowing it down to just 4. We can't even guess which book will win since they all look so read worthy.

Late to the Party

Seventeen is nothing like Codi Teller imagined. She’s never crashed a party, never stayed out too late. She’s never even been kissed. And it’s not just because she’s gay. It’s because she and her two best friends, Maritza and JaKory, spend more time in her basement watching Netflix than engaging with the outside world.

So when Maritza and JaKory suggest crashing a party, Codi is highly skeptical. Those parties aren’t for kids like them. They’re for cool kids. Straight kids.

But then Codi stumbles upon one of those cool kids, Ricky, kissing another boy in the dark, and an unexpected friendship is formed. In return for never talking about that kiss, Ricky takes Codi under his wing and draws her into a wild summer filled with late nights, new experiences, and one really cute girl named Lydia.

The only problem? Codi never tells Maritza or JaKory about any of it.

How I Saved the World in a Week

Rule number one: Always be prepared . . .

Billy's mum isn't like other mums. All she wants is to teach him the Rules of Survival - how to make fire, build shelter and find food. She likes to test Billy on the rules until one day she goes too far, and Billy is sent to live with a dad he barely knows..

Then the world changes forever as people begin to be infected with a mysterious virus that turns their skin grey. As chaos breaks out, Billy has to flee the city. Suddenly he realises that this is what his mum was preparing him for - not just to save his family, but to save the whole world.

Clap When You Land

Camino Rios lives for the summers when her father visits her in the Dominican Republic. But this time, on the day when his plane is supposed to land, Camino arrives at the airport to see crowds of crying people…”

In New York City, Yahaira Rios is called to the principal’s office, where her mother is waiting to tell her that her father, her hero, has died in a plane crash.

Separated by distance—and Papi’s secrets—the two girls are forced to face a new reality in which their father is dead and their lives are forever altered.

And then, when it seems like they’ve lost everything of their father, they learn of each other.

Yes No Maybe So

YES Jamie Goldberg is cool with volunteering for his local state senate candidate—as long as he’s behind the scenes. When it comes to speaking to strangers (or, let’s face it, speaking at all to almost anyone), Jamie’s a choke artist. There’s no way he’d ever knock on doors to ask people for their votes…until he meets Maya.

NO Maya Rehman’s having the worst Ramadan ever. Her best friend is too busy to hang out, her summer trip is canceled, and now her parents are separating. Why her mother thinks the solution to her problems is political canvassing—with some awkward dude she hardly knows—is beyond her..

MAYBE SO Going door to door isn’t exactly glamorous, but maybe it’s not the worst thing in the world. After all, the polls are getting closer—and so are Maya and Jamie. Mastering local activism is one thing. Navigating the cross-cultural romance of the century is another thing entirely.