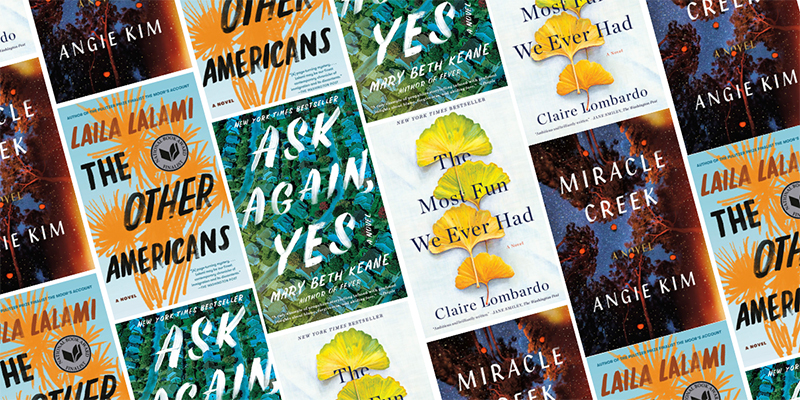 Every month we're pleased to bring you a short list of contenders for our Monthly Girly Book Club pick. We work really hard to ensure the list includes only titles available in paperback in our main markets, making the book more accessible to our membership. We also try to include a variety of authors and genres. We spend hours and hours pouring over potential books, their release dates, costs and availability. We hope you enjoy our selection.

From the Pulitzer Prize finalist and author of The Moor’s Account, here is a timely and powerful new novel about the suspicious death of a Moroccan immigrant–at once a family saga, a murder mystery, and a love story, informed by the treacherous fault lines of American culture.

Late one spring night, as Driss Guerraoui is walking across a darkened intersection in California, he’s killed by a speeding car. The repercussions of his death bring together a diverse cast of characters: Guerraoui’s daughter Nora, a jazz composer who returns to the small town in the Mojave she thought she’d left for good; his widow, Maryam, who still pines after her life in the old country; Efraín, an undocumented witness whose fear of deportation prevents him from coming forward; Jeremy, an old friend of Nora’s and an Iraqi War veteran; Coleman, a detective who is slowly discovering her son’s secrets; Anderson, a neighbor trying to reconnect with his family; and the murdered man himself.

As the characters–deeply divided by race, religion, and class–tell their stories, connections among them emerge, even as Driss’s family confronts its secrets, a town faces its hypocrisies, and love–messy and unpredictable–is born.

A profoundly moving novel about two neighboring families in a suburban town, the bond between their children, a tragedy that reverberates over four decades, the daily intimacies of marriage, and the power of forgiveness.

Francis Gleeson and Brian Stanhope, two rookie cops in the NYPD, live next door to each other outside the city. What happens behind closed doors in both houses—the loneliness of Francis’s wife, Lena, and the instability of Brian’s wife, Anne—sets the stage for the explosive events to come.

Ask Again, Yes is a deeply affecting exploration of the lifelong friendship and love that blossoms between Francis and Lena’s daughter, Kate, and Brian and Anne’s son, Peter. Luminous, heartbreaking, and redemptive, Ask Again, Yes reveals the way childhood memories change when viewed from the distance of adulthood—villains lose their menace and those who appeared innocent seem less so. Kate and Peter’s love story, while tested by echoes from the past, is marked by tenderness, generosity, and grace.

The Most Fun We Ever Had

A dazzling, multigenerational novel in which the four adult daughters of a Chicago couple—still madly in love after forty years—recklessly ignite old rivalries until a long-buried secret threatens to shatter the lives they've built.

When Marilyn Connolly and David Sorenson fall in love in the 1970s, they are blithely ignorant of all that's to come. By 2016, their four radically different daughters are each in a state of unrest: Wendy, widowed young, soothes herself with booze and younger men; Violet, a litigator-turned-stay-at-home-mom, battles anxiety and self-doubt when the darkest part of her past resurfaces; Liza, a neurotic and newly tenured professor, finds herself pregnant with a baby she's not sure she wants by a man she's not sure she loves; and Grace, the dawdling youngest daughter, begins living a lie that no one in her family even suspects. Above it all, the daughters share the lingering fear that they will never find a love quite like their parents'.

As the novel moves through the tumultuous year following the arrival of Jonah Bendt—given up by one of the daughters in a closed adoption fifteen years before—we are shown the rich and varied tapestry of the Sorensons' past: years marred by adolescence, infidelity, and resentment, but also the transcendent moments of joy that make everything else worthwhile.

Spanning nearly half a century, and set against the quintessential American backdrop of Chicago and its prospering suburbs, Lombardo's debut explores the triumphs and burdens of love, the fraught tethers of parenthood and sisterhood, and the baffling mixture of affection, abhorrence, resistance, and submission we feel for those closest to us. In painting this luminous portrait of a family's becoming, Lombardo joins the ranks of writers such as Celeste Ng, Elizabeth Strout, and Jonathan Franzen as visionary chroniclers of our modern lives.

How far will you go to protect your family? Will you keep their secrets? Ignore their lies?

In a small town in Virginia, a group of people know each other because they’re part of a special treatment center, a hyperbaric chamber that may cure a range of conditions from infertility to autism. But then the chamber explodes, two people die, and it’s clear the explosion wasn’t an accident.

A showdown unfolds as the story moves across characters who are all maybe keeping secrets, hiding betrayals. Was it the careless mother of a patient? Was it the owners, hoping to cash in on a big insurance payment and send their daughter to college? Could it have been a protester, trying to prove the treatment isn’t safe?