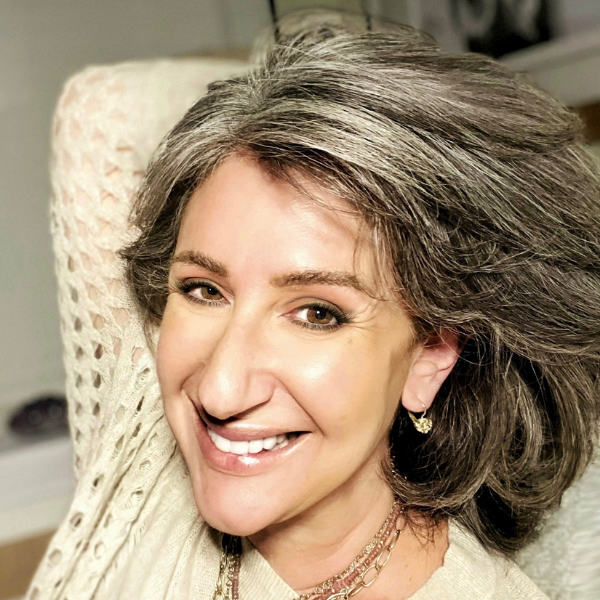 The author of eighteen New York Times bestsellers and nineteen USA TODAY bestsellers, Jane Green is a former journalist in the UK and a graduate of the International Culinary Center in New York. Her many novels include Jemima J, The Beach House, Falling, The Sunshine Sisters and, most recently, The Friends We Keep, and she has published one cookbook, Good Taste. Follow her on Instagram at @janegreenauthor.

The Gloss Book Club: What can you tell our members about your newest novel, Sister Stardust?

Jane Green: Sister Stardust starts in London in the swinging sixties, at a time when England was bursting into color, with The Beatles and the Rolling Stones crowned the new kings of the world, as young people discovered psychedelic drugs, rock and roll, and their own sexuality. Claire is a self-described country mouse who is desperate to experience life, and moves to London to reinvent herself. There, she gets swept up in a crowd of sophisticated musicians, who whisk her off to Marrakech to stay at the palace of Paul and Talitha Getty, a very beautiful Dutch Socialite and actress who was married to the son of the richest man in the world at the time.

Talitha Getty’s iconic bohemian style and illustrious social circle (which included the likes of Mick Jagger, Gore Vidal and Yves Saint Laurent), became the stuff of legend. She was famous for throwing lavish picnics and parties, bacchanalian feasts that were filled with drugs, that often descended into wildly hedonistic and orgiastic affairs. Diana Vreeland would write about her all the time, recognized her instantly as a style icon, but behind the scenes it is all devolving into darkness and tragedy. Paul Getty Jr moved from opium addiction to heroin, with Talitha following suit. Claire, who renames herself Cece, finds herself falling completely in love with this world, and with Talitha, with no idea how dark it will be, nor the tragedy that will befall them.

TGBC: Sister Stardust is a departure for you, as this is the first book you’ve released based on a true story. What inspired you to write this novel reimagining the life of Talitha Getty?

JG: I must have been a teenager when I first saw the famous Patrick Lichfield photograph of Talitha and Paul Getty on the rooftop of their Marrakech palace. She is sprawled out in a magnificent wedding caftan, with Paul standing in the distance behind her, in a long djellaba. I was instantly mesmerized; there was something about her beauty and style, combined with a sadness in her eyes. Only during the research did I discover that they were so stoned during this shoot, Vogue almost didn’t run it! I was immediately obsessed, and have continued to be, my entire adult life. have spent my entire life wondering about her, but there is so little known, other than her tragic death at the age of 30 from a heroin overdose. I knew that Paul later shot to infamy in 1976, after Talitha had died, when his son “Little Paul” was kidnapped in Rome and had his ear cut off. I knew she was friends with people like Yves Saint Laurent, Rudolph Nureyev, and Mick Jagger, but little else. When my very clever editor suggested I try historical fiction, hers was the only story I wanted to tell, or at least, the story of a girl who gets caught up in Talitha’s spell.

TGBC: Why did you choose to tell the story from Claire’s point of view?

JG: I took the best part of a year to research not only her, but everyone around her. By the time I came to write, I felt that I knew her very well, and that I knew that world, but I still wouldn’t have dared tell the story from Talitha’s point of view – the idea of stepping into someone’s head who actually existed was too overwhelming, whereas creating a fictitious character gave me all kinds of latitude.. But I wanted a narrator, almost a Gatsbyesque Nick, who is able to stand slightly on the outside observing everything. And, I wanted to write about female friendship as part of this book, the kind of very bright, very intense female friendship that can feel a lot like falling in love. I had no idea quite where this would lead, and wrote much of this story blind, loving watching it unfold as I wrote, not quite sure what would happen to Claire.

TGBC: You have said that you’ve been obsessed with Talitha Getty for your entire adult life; when it came to writing this novel, what kind of research was involved and how long did it take you before you began writing?

JG: The tricky part was the research, because although the photographs of her taken for Vogue have continued to inspire so many in fashion, from Phoebe Philo to Kate Moss, there is not much written. The circumstances around her death were dubious. At first it was reported to be an overdose of barbiturates, before it was changed to heroin, and no-one knows quite how it happened, other than that Paul was there, he may possibly have supplied the heroin, and he looked in one her and thought her asleep, when in fact she was dying. He lived with that guilt for the rest of his life, and it came close to destroying him too. But, as a result I suspect the family closed ranks. I read biography after biography, interview after interview with people who were in their circle, sometimes inner, like Bill Willis, sometimes outer, like Suzi Wyss. It was much like looking for diamonds in haystacks, but every now and then I would stumble upon something extraordinary which filled in the blanks.

TGBC: What was the most surprising thing you learned from your research?

JG: I hadn’t known that she spent the first years of her life in a Japanese internment camp. Her parents had moved to Java, the Dutch East Indies, for her father to paint, and when the Japanese invaded, all the Dutch were thrown into prison camps. It was deeply traumatic for her, and she covered up that trauma with this exuberant, huge, fun personality, but unresolved trauma doesn’t go away by itself, and the last couple of years of her life were hard. I also hadn’t understood how free love and sex were. Of course, I thought I knew what happened in the ‘60s, but so many of the bacchanalian feasts at the Gettys’ descended into wild orgiastic parties. It was fascinating to write about it from today’s perspective.

TGBC: How did you get into writing and what inspired you to write your first book?

JG: I fell into journalism in my early twenties, and wrote my first novel at twenty seven, essentially about my life and that of my girlfriends, and all the awful men we were dating. It became a huge bestseller in the UK, which led to my first bestseller in the US, Jemima J, which was an updated version of the Cinderella story. I think I wrote that first book because I hadn’t read any books that reflected my life back to me, and I thought it was time. Nick Hornby was doing it for men, with High Fidelity, and of course little did I know that Helen Fielding was sitting in her flat, a mile down the road, writing Bridget Jones’s Diary!

JG: As terrible as this is to admit, I don’t think much about my readers. I have a propensity to be a people-pleaser, and if I started worrying about my readers, I suspect I would keep having to go back and change things. My goal is pretty simple: to tell a great story, with emotional resonance, that pulls me in while I’m writing. When I lose hours at a time, so immersed in another world, I know I’m on the right path.

TGBC: What does your writing process look like? Do you map each story out from start to finish or do you begin with an idea and see where it takes you?

JG: I always have a rough idea of the structure, how it will start, how it will end, and a loose idea of the turning points. I follow a very traditional Greek three act structure, with plot points at the end of each act that spin you into the next. That said, I allow much room for change. When you write your characters correctly, they invariably end up taking the story in a different direction, and I have always followed their lead.

JG: That’s a great question. I’m not sure anymore. It always used to be hitting the New York Times Bestseller list, which I have been lucky enough to do with eighteen prior books. Of course I would love that, but with this book I think it’s more important to me that it reaches a wide audience. I love Talitha, and would love her to be celebrated properly. She really was the founder of the bohemian style that has become de rigeur today, and everyone who has read the book has immediately gone down the Google rabbit hole to see what everyone looked like. That, I think, is success.

TGBC: Any advice you can share with the aspiring writers within our community?

JG: Writing requires a Ph.D. In my book that’s persistence, humility, and discipline. Anyone can have a good idea, but having the persistence to keep going in the face of rejection, the humility to listen to people who know more than you, and the discipline to get your butt in the chair and write until you finish, is the difference between an aspiring writer, and a writer.